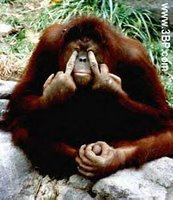 Under the Bush regime, spin terminology has achieved new heights of both creativity and downright stupidity. We expect spin from politicians. We accept it. Most spin terms are so commonplace and mundane that I can easily let them go in one ear and out the other, but there are times when I feel like my head is going to explode! Here are some of the spin terms that make me crazy.

“America has an image problem in the Muslim world”. This implies that the Muslim perception of the U.S. is at odds with the reality of the U.S. WRONG!! It’s not the image that’s the problem…it’s the reality that sucks! America does not have an IMAGE problem, it has a REALITY problem.

“Achieving victory in Iraq”. Sounds laudable enough doesn’t it? One problem…what the hell constitutes “victory”? It changes every 30 seconds! You can’t achieve a goal until you actually DEFINE the goal..dammit. (it’s kinda like running a race, you can’t cross the finish line until you know where the finish line is)

“Commander-in-Chief”. OK, this is not a spin term, it’s a legitimate phrase. It’s the current holder of the title that puts it into the category of spin. The root word of commander is “command” denoting control over something. This president has control over nothing…he merely does what others tell him to do. He’s not a Commander-in-Chief, he’s a Sheep-in-Chief. (sounds like the main course on a menu doesn’t it?)

"Illegal spying on American civilians being described as a “program”. This one is showing up all over the place. Not only does Bush and his cronies refer to the spying as a “program”, it also seems to be the terminology that the MSM and even the blogosphere is using when referring to this outrage. I object to the term “program” because it makes it sound so benign, so routine and ordinary, just another innocuous government program, no different from say…the student loan program. Call it what it is – an outrage, a scandal, criminality, reprehensible….anything that doesn’t imply that it was harmless and nothing to get your shorts in a wad over.

“Pro-life”. If you’re pro-life, then you’re for life..all life..even low lifes. That means that you are against the death penalty, you’re against carnivorous eating habits, you’re against letting people starve to death in Africa. If you claim that you are pro-life but you don’t support life in all its myriad forms, then you are not pro-life…you are merely ANTI-ABORTION. Get the word “life” out of it – I know it makes you feel morally superior, but you have no damn right to it.

This is just a small sampling of what drives me to drink. Feel free to add to the listing - I'm interested in hearing what other phrases make people want to poke a stick in their eyeballs. If you'll excuse me, I think I'll go join the elephants for a round of rice beer. I need it.
Posted by Cheryl at 15:34 Recommend this Post