If Men Were Actually Doing The Housework.... 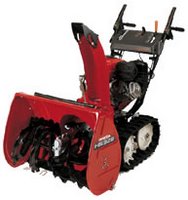 THIS is a snow blower. What was once shovelled by hand, is now removed by the heavy-duty, high-gauge steel, self-propelled, whirling blade of a high horsepowered, big honkin' machine, complete with headlights. Where before you couldn't pry a man off the couch to shovel snow, brigades of men watch for that first snowflake and the chance to put the "beast" to work defeating nature's winter assault.

Women have more than a legitimate complaint when it comes to housework. The Happy Feminist described her take on it and the consequence that many women are now doing a double shift after completing a full day in the workforce. Hugo added another aspect in that no matter WHO does the housework, the woman in the household is always the one subject to judgement by others. It is also not difficult to tell that a significant amount of housework is not being done by men. How do I know? The tools.

If men were actually doing one-half or more of the housework, the tools would be different. Take a look at any job which was traditionally done by a man in the past and you will, with near certainty, find a hand version and then a version that has a horsepower rating on the product plate. Why would you use a hand plane to trim the excess length off of a door when you can use a 1.5 HP belt-sander to rip away the same amount of material in 1/8th the time?... And make a lot of noise doing it.

Take a look at these vacuum cleaners: 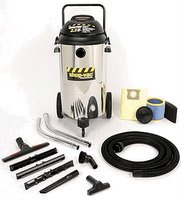 The one on the left is a familiar creature. A similar device can be found in almost any household. It requires the operator to push it back and forth and, from extensive personal experience, requires several passes over the same spot to complete its work, particularly if it's picking up pins, paper clips and the hair of little critters. The one on the right may be less familiar, but odds are, it resides in a workshop. It will suck up dirt, water, wood chips and small rodents. It has an outlet that allows the user to change it from "suck" to "blow". It's better than the other one, but it's still not good enough. The one below the others is a gas-powered, 3 HP, machine. You won't find this in the house, but you need to know that this thing will do everything the others do plus completely remove the hair from a Scottish Terrier in one pass. It's getting closer to being a real machine because you need to wear ear defenders when it's running. This machine was designed by men for men. But it's still lacking in one area - it needs to be pushed.

So what would a vacuum cleaner look like if men were really doing the housework? Well, a lot like this:

Notice! Self-propelled! Articulating, power-driven, pick-up arm. Ergonomic seating. Most men would wrestle their wives to the ground to be allowed to do the vacuuming if THIS is what constituted a vacuum cleaner. This thing requires the operator use both hearing and eye protection. This is a machine. Believe me, if men had been doing housework all along, something like this would be in many, many households already.

If men had been cleaning windows for the past half century do you think a squeegie and paper towel would still be the primary method of wiping the haze from the glass? Hardly. Windows would have automatic cleaning blades, inside and out, which would make a bus-wiper look like something from a Dinky-Toy. The deluxe model would have a remote control.

Dusting? A 2400 rpm spinning bonnet run off a power take-off on the ride-em vacuum trolley. A small amount of suction and dusting is a snap. I suppose I wouldn't be giving up any secrets if I suggested that a similar device exists already... for woodworking shops.

How long do you think it would take to convert bathrooms if men were doing all the cleaning? Within a decade, bathrooms would be completely waterproof and they would be plumbed with a fixed pressure wash system. But until men take on a greater share of the work, it's going to continue to be rubber gloves, spray cleaners and sponges.

Men have no excuse for not doing laundry. The modern automatic washer is a near perfect device. It is delightful marriage of pumps, motors, timers, automatic valves and steel. If there is a down side it is the safety interlock found on most machines which doesn't allow you to actually watch the spin cycle. The perfect machine would also include a dryer and, for what it's worth, such a machine already exists. I have found ironing is no problem. If a piece of clothing requires ironing, it's not mine.

So, how will we know when men have actually taken on responsibility for cleaning? The tools. Watch for the tools.