The Central Front Of The War On Christmas 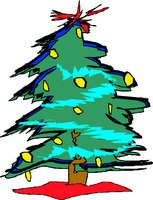 OK, so now we know who is behind the plot to destroy Christmas. I was a little disturbed at first. I mean, Bill, is going to be really upset. (I'm not linking to Bill. He's too busy for the extra traffic).
But then I got to thinking.... maybe Bill is wrong! (I know, I know. Just pretend for a bit.)

Bill, says Christmas is a sacred holiday celebrating the birth of Jesus. He says that there are those attempting to "wipe out any public display of... Judeo-Christian traditions".

Umm... not quite. The Christian bible doesn't actually say when Jesus was born. In fact, Christian scholars, using what was written in the Christian bible, can work out a rough birthdate. So, I've borrowed a couple of bibles and reproduced the scholars' experiment. (I know that's science, but bear with me.) Gabriel, the angel, visited Zacharias, a priest, during the course of Abijah. Gabe told Zach that his wife Elizabeth, who had been unable to get pregnant and was supposedly beyond child-bearing years, was to bear a son named, John. This is all in Luke 1: 5 thru 19.
OK, Zach was one of the duty priests at the temple during Abijah, which is the 8th squad, or week 15 and 16 from the start of the year. This we know from 1 Chronicles 24: 7 thru 10. Given the two week rotation of priests, and the fact that the Hebrew calendar started with the first New Moon nearest the spring equinox or around mid-March, that would put Gabe visiting Zach with the news of Liz's pregnancy in early July. (Stay with me here... we're talking tune-ups; not tires.)
Gabriel dropped in on Mary. He announced that she was pregnant and would give birth to a baby named, Jesus. Mary was upset and didn't believe it, holding up her virginity as proof that Gabe had made an error. Gabe then told Mary that Liz, her aged and infertile cousin, was six months pregnant at the will of God. You can read all about it in Luke 1: 26 thru 37.
This is important because we can now nail down Gabriel's visit to Mary as having occurred in early January. Ahem... add roughly 9 months and you get late September or early October.
Oh well... oops! (Shall we push for another stat holiday here?)

Scary stuff! It's looking like Bill might have a problem here, but then there's the fact that December 25th is Christmas. Well actually, it's a lot of things. But the one thing it is certain: the winter solstice occurs right around then and almost every religion on Earth viewed that occasion as the rebirth of the Sun in some form or another. The Romans celebrated Saturnalia for a week after the solstice, and Emperor (Not that one! The Roman guy) Aurelian introduced Sol Invictus as a December 25th celebration in 274 CE. Nobody, not even the Christians, seemed to be celebrating Christmas. There didn't appear to be any such thing. Bill, isn't going to like this. As Christians moved northwards they encountered Germans and Druids, all celebrating around December 25th. They had no idea who Jesus was, but they were happily worshipping the Sun and its re-emergence from darkness in the form of a Yule Feast. (Very cool. We're going to revisit this for sure.) They did strange things with trees and the Germans in particular would haul evergreens into their dwellings. (Probably a kickback tradition from the Roman tradition of giving fir trees as gifts... right around the solstice.) I suppose it would probably hurt Bill to know that the Germans invoked sex. The trees were a sort of phallic symbol... nah! Skip it.

Sometime late in the 4th Century CE, the feast of The Nativity seems to have taken hold. It looks very much like the Roman Emperor did a deal with Christianity since all the correspondence of the day suggests that December 25th would become the accepted date of the birth of Jesus as a means to inculcate Christian beliefs without shocking the heathens. (My ancestors.) The first mention of Christmas appears in 1038 in Old English - Cristes Maesse - Mass of Christ.

We won't even discuss the fact that Christmas was illegal for a time in the American colonies and decorated trees didn't find their way to the US until the 1830s.

And, Bill, about the "Judeo" part of your statement. That's, well, Jewish. That half of the Judeo-Christian tradition doesn't recognize Christmas. It's kinda, sorta not their tradition.

And then there's this word holiday that seems to be getting so many knickers in a twist. I don't get it. It comes from two root words - Holy and Day. I know Bill will fix this... unless he thinks Labor Day is somehow, holy.

Oh yeah. Yule. Remember the Great Cat? Well, boy-howdy, it is a Yuletide tradition! It is actually more traditional and more accurate than December 25th being the birth of the Christian Messiah. So, corporate America should get down on its knees and thank its God that the Yule Cat has been around for centuries longer than the 2000 years of Christianity.

So, Bill, all those libruls aren't trying to destroy Christmas at all. We're all trying to save December 25th because you don't seem to be able to get it right.
Posted by Dave at 21:48 Recommend this Post