The British government has placed a large number of old Top Secret files in the public archives. This is a standard practice 30 years after the file is considered closed. Observers remarked that some of the documents were the most secret they had ever seen, some of them detailing 1975 plans in the event of a nuclear war.

The mid-1970s were an extremely tough time for Britain. Rampant inflation was ravaging the economy and there was a strong possibility that Britain would be forced to declare a form of national bankruptcy. In 1976 Britain had to borrow 2.3 billion pounds sterling from the International Monetary Fund just to maintain services.

Given Britain's desperate financial condition, the gift of two pandas, Ching-Ching and Chia-Chia, from China created something of a fuss. The London Zoo was nearly broke and had to build a habitat for the two critters. Failure to do so raised concerns in cabinet that it would be viewed as a snub. There was also the concern that the cost of imported bamboo shoots, a panda's sole diet, was more than the zoo could afford. 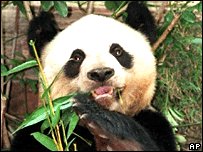 Panda creating controversy
Posted by Dave at 21:20 Recommend this Post