The Valley of Futility 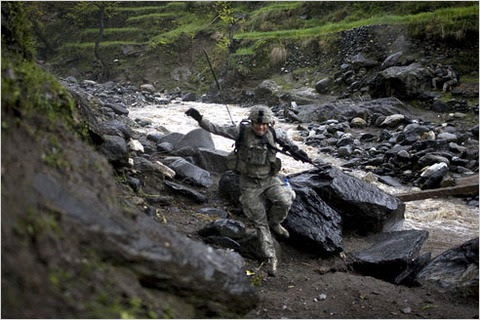 LAST WEEK, THE U.S. PULLED OUT OF THE KORENGAL VALLEY. According to an article in the NYT by Sebastian Junger, "Farewell to Korengal",

For much of 2007 and 2008, I was an embedded reporter with a platoon of airborne infantry at a remote outpost called Restrepo, which was attacked up to four times a day. Many soldiers had creases in their uniforms from bullets that had brushed them. In one firefight a bullet hit a sandbag six inches from my head.

The psychological pressure was enormous. “I’ve only been here for four months and I can’t believe how messed up I am,” one soldier told me. “I went to the counselor and he asked if I smoked cigarettes and I told him no and he said, ‘Well, you may want to think about starting.’”

There were around 20 men at Restrepo — part of a 150-member unit called Battle Company of the 173rd Airborne Brigade Combat Team — and the possibility of getting overrun by the enemy was openly discussed. The men slept next to their guns and sometimes with their boots on. More than 40 American soldiers have died.

“The whole point of counterinsurgency is that by securing the local population, you legitimize the government of Afghanistan,” said Major Fussell. “But the thing about the Korangal and Waygal Valleys is that they don’t recognize any government beyond their little village, and when you go to them and say, ‘we want to secure you and offer you a road’ they say, ‘we don’t want a road.’”

“I would argue you couldn’t find a single Korangali who wanted any outside assistance.” 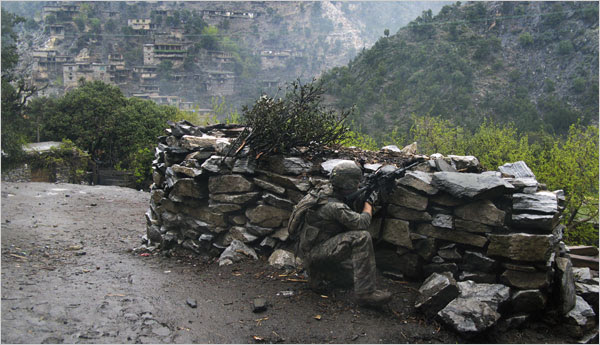 Adding to the malaise is a report by C.J. Chivers, "Arms Sent by U.S. May Be Falling Into Taliban Hands" — ammunition and small arms sent to Afghani police is winding up with the Muj.

KABUL — Insurgents in Afghanistan, fighting from some of the poorest and most remote regions on earth, have managed for years to maintain an intensive guerrilla war against materially superior American and Afghan forces.

Arms and ordnance collected from dead insurgents hint at one possible reason: Of 30 rifle magazines recently taken from insurgents’ corpses, at least 17 contained cartridges, or rounds, identical to ammunition the United States had provided to Afghan government forces, according to an examination of ammunition markings by The New York Times and interviews with American officers and arms dealers.

Email ThisBlogThis!Share to TwitterShare to FacebookShare to Pinterest
Labels: getting out of Afghanistan