A FEW DECADES AGO, PRINCETON UNIVERSITY opened up P.E.A.R., Princeton Engineering Anomalies Research. It was closed in 2007, after completing its experimental agenda of studying the interaction of human consciousness with sensitive physical devices, systems, and processes, and developing complementary theoretical models to enable better understanding of the role of consciousness in the establishment of physical reality.

That's mind control, folks. Boogity-boogity. The neat thing is, it's for real. No tin hat required.

The most substantial portion of the PEAR experimental program examines anomalies arising in human/machine interactions. 6 or 7 years ago, I watched an amazing @Discovery Canada segment where the gang visited PEAR, and showed them controlling a moving battery-powered mouse-toy. Unfortunately, I cannot winkle it out of the web.

In these studies human operators attempt to bias the output of a variety of mechanical, electronic, optical, acoustical, and fluid devices to conform to pre-stated intentions, without recourse to any known physical influences. In unattended calibrations all of these sophisticated machines produce strictly random data, yet the experimental results display increases in information content that can only be attributed to the consciousness of their human operators.

Over the laboratory's 27-year history, thousands of such experiments, involving many millions of trials, have been performed by several hundred operators. The observed effects are usually quite small, of the order of a few parts in ten thousand on average, but they compound to highly significant statistical deviations from chance expectations.

ICRL is a non-profit that continues the PEAR research and offers course material for study. Psyleron makes stuff, encourages you to be willful; they proclaim they are

a company and research organization that explores the connection between the mind and the physical world. Discoveries made at the Princeton Engineering Anomalies Research (PEAR) laboratory have shown that human intention and group dynamics can influence the behavior of quantum electronic devices known as Random Event Generators (REGs). Psyleron was founded by PEAR scientists and associates with the purpose of developing products and materials that enable ongoing research and public exploration of mind-matter effects.

One of their products is The Psyleron Mind Lamp™. 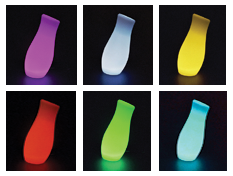 The Psyleron Mind Lamp™ is a color-changing ambient device that can respond to your conscious or subconscious mind. Inside the lamp is a quantum measurement device called a random event generator, or REG. The REG controls the relative mixtures of an internal LED's primary colors: red, green, and blue. The mixtures result in the many vibrant and dynamic colors produced by the lamp. Each lamp is constructed of blown glass and is sandblasted to achieve a semi-opaque surface that gently disperses light. The lamp's high-quality construction makes it a great gift item, and a beautiful addition to any living area or workspace.

Like Oddball said in "Kelly's Heroes", it's all about them positive waves, man.