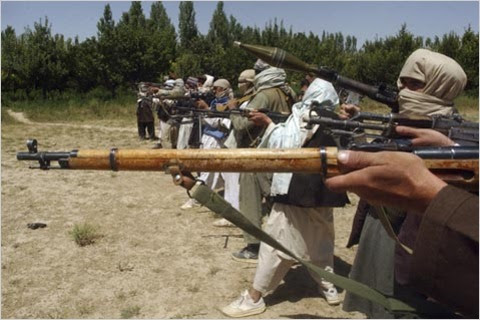 Taliban fighters training in Afghanistan in 2009.

THE NYT BLOG, "AT WAR", NOTES FROM THE FRONT LINES has an article by C.J. Chivers, "The Weakness of Taliban Marksmanship". Apparently, the Muj just don't have what it takes to get the round in the X-ring. The problem has a number of sources: lack of training ("Spray and Pray"), vision problems, bad, inconsistent ammo, and poor firearms maintenance.

Last week, At War opened a conversation about Afghan marksmanship by publishing rough data from several dozen recent firefights between the Taliban and three Marine rifle companies in and near Marja, the location of the recent offensive in Helmand Province. The data showed that while the Taliban can be canny and brave in combat their rifle fire is often remarkably ineffective.

Many factors are at play. Some of you jumped ahead and submitted comments that would fit neatly on the list; thank you for the insights. Our list includes these: limited Taliban knowledge of marksmanship fundamentals, a frequent reliance on automatic fire from assault rifles, the poor condition of many of those rifles, old and mismatched ammunition that is also in poor condition, widespread eye problems and uncorrected vision, and the difficulties faced by a scattered force in organizing quality training.

when it comes to rifle fighting, the Taliban – absent major shifts in training, equipment and logistics – are likely to remain mediocre or worse at one of the central skills of modern war. And the chance of any individual American or Afghan soldier being shot will remain very small. The flip side is that parts of the list can also be read as bad news for Western military units, because Afghan army and police ranks are dense with non-shooters, too.

Next on the list was a matter of public health. Many Afghans suffer from uncorrected vision problems, which have roots in factors ranging from poor childhood nutrition to the scarcity of medical care. Using the iron sights on an infantry rifle requires a mix of vision-related tasks. A shooter must be able to discern both the rifle’s rear and front sights (directly in front of the shooter’s face) and also see the target (as far as several hundred yards off). Then the former must be aligned with the latter. This is difficult in ideal circumstances for lightly trained gunmen; for some people with bad vision, it might be almost impossible. Over the years many officers and noncommissioned officers who train Afghan police and soldiers have said that a significant number of Afghan recruits struggle because of their eyesight. The Taliban recruit their fighters from the same population; poor vision can be expected to be a factor in their poor riflery.

Let's just hope they don't acquire some nice, clean Moison-Nagants or Dragunovs with scopes from the Great Patriotic War — and the training on their proper use and care.