The burning priviledge of St. Albert 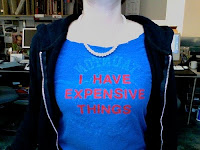 JJ and Pale highlighted a letter sent to the St. Albert Gazette earlier this week where Chris and Karleena Perry decried the notion of low or even (gasp!) middle income families being "allowed" to move into an area that is occupied by.... the conspicuously wealthy. That letter contained such gems as: (all emphasis mine)

The average family income for St. Albert is higher than in Edmonton or any other area municipality. We moved to St. Albert because we can afford it and we deserve it. This is a great city with great families. We feel comfortable joining in activities we would not have considered in Edmonton.

Hmmm. I have relatives who live in that town and I can tell you, they play a lot of this. And then there was this:

When we first moved to St. Albert our teen had a hard time fitting in because of money and it was hard on him. Now he is good, but it did not go away with just a loving hug — his status was accomplished once his friends saw our house and other possessions. It sounds cruel but that is how it is; ask your children, they will tell you.

Aha! The kid gets to be a member of the club because it can engage the other snotty pieces-of-work as an equal. Membership in the "gang" is assured because of parents' wealth. All the trappings will be there - expensive clothes, expensive wheels, expensive iPhone, ad nauseum.

And, of course, the teens appreciate all of this conspicuous wealth and treat it with unbelievable respect. Well.... maybe not so much.

On Friday RCMP Const. Janice Schoepp confirmed the detachment was investigating the blaze as arson and said they had not yet identified any suspects.

She said the blaze appears to have been started when someone lit a roll of toilet paper on fire, burning both the roll and melting the plastic dispenser, which caused the heavy smoke.

Heh. Start checking a few pockets for one of these.