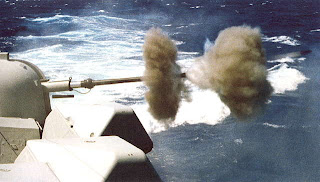 Why not stick with the theme?

Toronto Star Public Editor, Kathy English, presented us with a non-apology yesterday in a convoluted attempt to "clarify" the waters which she muddied when she dutifully obeyed the instructions of others and publicly disciplined Antonia Zerbisias in a drive-by hit for a comment left on Broadsides.

English got a virtual earful, from all sides, in response.

English, to put it mildly, has simply highlighted her own lack of understanding of the network medium she is unsuccessfully attempting to control and defends her position by continuing to suggest her initial shot was correct.

At this point, you should read Dr. Dawg, Unrepentant Old Hippie and Pale to get the range.

English, as you can see from reading the above postings, clearly doesn't get it. She had the fall of shot called on her first column and everybody called it way off target.

I don't need to add much to that, except to say that her "tone" in the latest offering suggests a high level of keyboard rage and makes clear her disdain for anybody smithing words without the benefit of a paycheck and particularly those who have not earned their stripes in the "Toronto School".

I could fire back with two words, which English would dismiss as evidence supporting her current view. So, I'll say this: We are your readers, Ms. English.

The "new media" and the bloggers English decided to castigate are the same people that used to sit around the kitchen table bitching about things read in newspapers and whose only recourse was to submit a letter to the very organ and editor with whom they took issue.

It was a one-sided arrangement that left communicative readers at the mercy of "edited for brevity" or without a voice at all. What English doesn't like is that we like this process a whole lot better. Further, because of the "new media" we are able to communicate directly with the principle subjects of stories and columns - and do. I'm sure that sends chills down the spines of newspaper editors because their worst nightmare has come true: continuous and unrelenting scrutiny, and continuous and unrelenting criticism - some of it accompanied by the language spoken around the kitchen table.

In that context, I'll add to the return fire offered by the bloggers above.

English, in defending her ambush of Zerb, said: (emphasis mine)

Here's the fuller context that explains why she wrote this: Zerbisias had seen Farber marching in the Pride parade wearing a T-shirt that said, "Nobody knows I'm gay." She didn't include that information in her blog so readers didn't know that context. Nor did she tell me that when I showed her my column before publication.

In complaining to the Star, neither did Farber think to tell me that he, along with dozens of others who marched with the Kulanu group, had worn a T-shirt that made its own ironic quip. That's context I sure wish I had known.

She didn't know that?! How much time would it have taken to find out? Within minutes of publishing her initial column, all of us were provided with the context.

Who's confusing readers now? English has admitted that her column was a knee-jerk reaction to the complaint of Canadian Jewish Congress head Bernie Farber and, instead of gathering every fact she could, she went with Farber's version of things.

She and John Cruickshank were manipulated by Farber.

As I said in an earlier post, Farber didn't like what Zerb had written in her initial post and wanted a way in. He found it; he trolled it; English and Cruickshank took the bait.

Readers deserve an apology for that. Not some doughy reproof for writing what's been said around the kitchen table.

Kathy English has a long way to go to catch up.