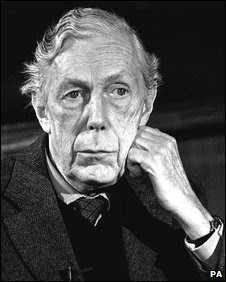 ONCE UPON A TIME, starting in the mid 30's, five Cambridge students were recruited by the NKVD: H.A.R. (Kim) Philby, Guy Burgess, Donald Maclean, John Cairncross and Anthony Blunt. They were amazing, unique characters living in an amazing, unique era, when "isms were wasms", and loyalties were passionate, and they came to be known, once their treason had been discovered as The Cambridge Five.

It is now 25 years since Anthony Blunt's death, and the British Library has released a 30,000 word memoir, written by Blunt as a somewhat evasive apology.

The revelations had led to a man who had worked as Surveyor of the Queen's Pictures being stripped of his knighthood.

His version of events was given to the library in 1984, the year after his death, on condition that it was not displayed for 25 years.

In it, he describes his recruitment by Moscow: "I found that Cambridge had been hit by Marxism and that most of my friends among my junior contemporaries - including Guy Burgess - had either joined the Communist Party or were at least very close to it politically."

The most interesting thing to my mind, is the complete lack of detail on his WW2 activities, both in his memoir, and in the literature about the Cambridge Five. Why? Some sources have stated that in May-June 1945, immediately after the German capitulation, Blunt went into Germany at the behest of the Royal family to obtain "documents" that would confirm Eddie the 8th's (and Wallie's) treasonous dealings with the Nazis, after his abdication, when they moved to France, and later, Portugal.

Thus, some contend, as a result of pulling the Windsors' chestnuts out of the fire, the Intelligence establishment refrained from any punitive action, when his treason came to their attention, probably in the late 50's, as a follow-up to inquiries about Burgess, Maclean and Philby.

Will we ever know? Probably not. Some interesting Cabinet papers do exist in the UK, but they have "Do Not Open Until" — dates vary, like 2020+. Oh well, we've got CSIS (Can't See Intelligent Solutions) to keep us entertained, so time will pass.