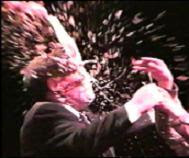 Somehow?! Stewart did it with maneouvre and exceptional skill. Kristol was, as usual, totally unarmed and unable to defend his ridiculous position.

Ridiculous? Yeah. Because if any American believes, based on the ruminations of the likes of a highly priviledged William Kristol, that single-payer health care doesn't deliver is listening to the wrong people.

Stewart didn't go where others had gone and attempt to defend the eleven different systems that exist under the Canadian scheme of health care. No, he took a road closer to home and pointed at the US, government-operated, military health care system. He dangled it in front of Kristol who was only too happy bite... until he realized there was a gigantic barbed hook attached and Stewart was ripping his gill plates out.

“They do not deserve the same quality of health care the soldiers fighting deserve, and they [the soldiers] need all kinds of things we don’t need,” Kristol said.

“Are you saying that the American public shouldn’t have access to the same quality of health care that we give to our better citizens?” Stewart asked.

“To our soldiers? Yes, absolutely,” Kristol responded, to a chorus of boos from the audience.

Moments later, Kristol added that “one of the ways we make it up” to soldiers that they receive relatively low pay is by “giving them first class health care. The rest of us can go out and buy insurance.”

“You trapped me somehow,” a visibly uncomfortable Kristol responded.

Raw Story has the video, well worth the watch.