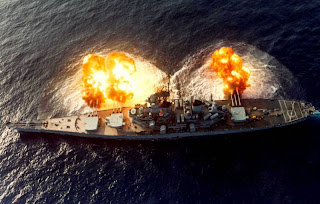 ... Something in the naval gunnery game which, when the ground observer is calling the fall of shot from a gunfire supporting ship off shore, creates a thing called "ping pong effect"*. It is considered a sin by ships' gunnery officers because it gives the opposition an advantage since the erronious gun aiming adjustments provided by the ground observer cause bullets to miss the target entirely. It elevates to "heinous crime" when the observer's expanding errors cause high-explosive ammunition to fall amongst friendly troops. It is usually caused by either inexperience or panic on the part of the observer, or a combination of both.

So, when Kathy English, Public Editor for the Toronto Star issued a column in which she, and publisher John Cruickshank apparently disciplined Broadsides author Antonia Zerbisias for her Canada Day post, English totally missed the point of the original post and focused instead on an issued which bubbled up out of the "comments" five days later.

First, this column is intended to address publicly the valid concerns of the Canadian Jewish Congress, whose chief executive officer, Bernie Farber, was the subject of a Zerbisias blog post that was tasteless and fell short of the Star's standards of fairness, accuracy and civility. That's a view shared by publisher John Cruickshank.

At this point I will send you off to Alison at Creekside to get the whole story done in a finer style. We'll be here when you get back.

As you can see, English and Cruickshank have corrected a well-off-target round as though it was the issue - the ironic behaviour of Canadian Jewish Congress CEO Bernie Farber participating in the Toronto Gay Pride Parade, (and wearing a T-shirt), which he had previously criticized (for including groups which were criticizing the state of Israel).

The point Zerb was making in her post was, as you know from reading Alison, completely valid in that she questioned the continued interference in journalistic freedom by Zionist lobby groups.

Freedom of Expression: Excuse me but since when did the interests of Zionist lobby groups determine who or what Canadians can see and hear?

And then went on to explain why she was raising that question.

English, after receiving a complaining letter from Farber about something which emerged in the "comments" to that original post, decided that the issue was about Teh Gay and whether Farber was or wasn't, and whether Zerb had actually said whether he was or wasn't.

English and Cruickshank have just allowed themselves to be had by Farber. He clearly didn't like what Zerb had written in her post, and was looking for a way in. He found it; he trolled it; and English and Cruickshank took the bait. This is the first mis-aimed bullet because the observer failed to concentrate on where the first shot was actually intended to land. What happened in Broadside "comments" is the equivalent of the round-to-round dispersion from a naval gun and the TorStar Public Editor allowed herself to believe that was a correctable round. Sin committed.

Now, I'll send you off to go read skdadl at Pogge where she illuminates the lack of sophistication and poor understanding of blogs demonstrated by both English and Cruickshank. Again, we'll be here when you get back.

Now, having read that, we have English and Cruickshank committing the "heinous crime" equivalent of "ping-pong effect"* in naval shore bombardment. Having already allowed themselves to be distracted by a stray bullet that was already well off the gun-target-line, they then call a correction which puts them even farther off target.

... the power of the Internet to make messages "go viral" means that numerous people from across Canada alerted Farber to this posting.

That line is analogous to the compounding error created by round-to-round dispersion and a situation where the observer calls a halt to gunfire support because now the rounds are landing in her/his position.

English and Cruickshank will soon become aware that "viral" is a mild definition. The so-called "new media" is networked in a way that newspapers like the Star could only have dreamed of in decades past. "Viral" is exactly the treatment that English's column is getting because the logic is so flawed and the purpose is so obvious that the network of watchers are making sure she and Cruickshank get called to account for it.

Either the TorStar Public Editor and Publisher caved to pressure from Farber and the CJC or both are unable to discern what was done to them. Either way, what they wrote still doesn't answer the original question asked in Broadsides. Which means the original target still hasn't been dealt with.

* Ping Pong Effect. Every time the observer calling in gunfire from a support ship corrects the ship's aim of a round which didn't go where it should have gone, it causes the next salvo to go even farther off target. This causes the observer to correct in the opposite directions using even wider adjustments resulting in exploding ordnance over a large area which will likely miss the intended target altogether. It makes the "target area" safe for the opposition and dangerous for everyone around them. And, yeah, I have loads of experience on both sides of that type of operation.

I used the particular analogy for two reasons: Zerb's blog is named Broadsides and English chose to use the term "Rules of Engagement".
Posted by Dave at 15:44 Recommend this Post