Some end of the year cleanup is in order, and how fitting it is to feature the bush administration.

From Bob Herbert of the New York Times we get:

Does anyone know where George W. Bush is?

You don’t hear much from him anymore. The last image most of us remember is of the president ducking a pair of size 10s that were hurled at him in Baghdad.

We’re still at war in Iraq and Afghanistan. Israel is thrashing the Palestinians in Gaza. And the U.S. economy is about as vibrant as the 0-16 Detroit Lions.

But hardly a peep have we heard from George, the 43rd. 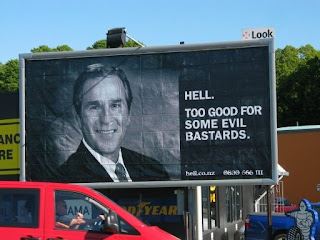 When Mr. Bush officially takes his leave in three weeks (in reality, he checked out long ago), most Americans will be content to sigh good riddance. I disagree. I don’t think he should be allowed to slip quietly out of town. There should be a great hue and cry — a loud, collective angry howl, demonstrations with signs and bullhorns and fiery speeches — over the damage he’s done to this country.

This is the man who gave us the war in Iraq and Guantánamo and torture and rendition; who turned the Clinton economy and the budget surplus into fool’s gold; who dithered while New Orleans drowned; who trampled our civil liberties at home and ruined our reputation abroad; who let Dick Cheney run hog wild and thought Brownie was doing a heckuva job.


The catalog of his transgressions against the nation’s interests — sins of commission and omission — would keep Mr. Bush in a confessional for the rest of his life. Don’t hold your breath. He’s hardly the contrite sort.

He told ABC’s Charlie Gibson: “I don’t spend a lot of time really worrying about short-term history. I guess I don’t worry about long-term history, either, since I’m not going to be around to read it.”

The president chuckled, thinking — as he did when he made his jokes about the missing weapons of mass destruction — that there was something funny going on.

Paul Krugman, winner of the Nobel prize in economics, also of the New York Times now weighs in:

Unusually, I’m having a vocabulary problem. There has to be some word for the kind of person who considers his mild discomfort the equivalent of torture, crippling injury, or death for other people. But I can’t think of it. 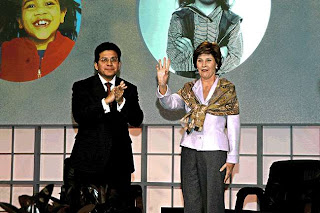 What brings this to mind is this from Alberto Gonzales:

"I consider myself a casualty, one of the many casualties of the war on terror."

This reminded me of Laura Bush’s remark on carnage in Iraq:

"And believe me, no one suffers more than their president and I do when we watch this."

Remember this. And remember, too, that for long years these people were considered heroic patriots, defenders of the nation.

(Cross-posted from Moved to Vancouver)

Posted by West End Bob at 15:47 Recommend this Post