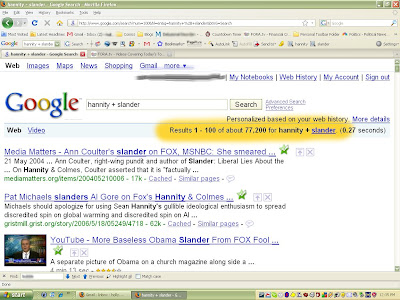 I don't watch US television, as a rule, but I do get Media Matters for America in my email, watching the right-wing media's lies and slander antics. Here's their latest update on Sean Hannity's view of nutjob Illinois governor Rod Blagojevich, (caught last week auctioning off the senatorship now that Obama's moved on) and Obama or his still-under-construction administration.

HANNITY: Well, Patrick Fitzgerald, the U.S. attorney -- and I read a story about him, that when he's involved in a case, this guy won't take a break, won't even take a day off until the case is finished. So he's fairly relentless as he goes forward here. Now, I watched his statement the other day very, very closely when this all came out, and what he said was, "There's no allegation in the complaint that the president-elect was aware."

I found that as sort of almost like a parsing of words, because the word "president-elect" was mentioned -- what -- I think some 44 times, Karl, which I think is a pretty high, high number.

Ol' Sean doesn't mention that "In fact, with one exception, none of the 44 instances in which "president-elect" was used in the complaint actually mention any alleged conduct or statement by President-elect Barack Obama or his representatives, much less any conduct or statement amounting to wrongdoing. The one exception consisted of an allegation that Blagojevich complained that Obama would not give him anything other than "appreciation."

Oh, for bonus points, Hannity was chitchating with Karl Rove, who's currently working as a colour commentator for Fox News (and apparently still working behind the scenes with the GOP.)
Posted by Noni Mausa at 10:40 Recommend this Post