Since no one is using it, maybe we could rent out the building 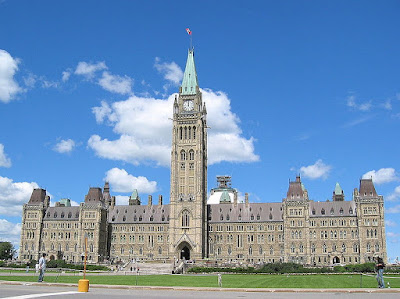 It might make a good homeless shelter this winter.

"Canada suffered its biggest monthly job losses last month since the recession of 1982 as 70,600 positions disappeared. Ontario's manufacturing sector is taking a direct blow from collapsing demand in the U.S., claiming about half of the November job losses. Unemployment crept up to 6.3 per cent, still near historical lows but also half a percentage point above the beginning of year.

And the U.S. is far from the only weight on Canada's job picture. The services side of the economy, which is more isolated from U.S. demand, also shed 38,000 jobs in the month – a sign that the sources of Canada's economic weakness are not just the United States, but also a deceleration in consumer spending, business investment and the housing market, economists said."

If only there was some sort of central authority that could organize a communal effort to help these people thrown out of work and perhaps help to steer our economy by making some rules to guide business and keep them from getting into trouble. We could all pitch in some money and they could figure out the best way to spend it to fix these sorts of problems. We could get everyone to vote in their own area to pick people, send them all to meet, talk it over and decide what to do. Canadians are smart enough to survive killer winters, if we some really smart people together, I'm sure they can figure something out.
Gee, didn't we used to have something like that based in a big, old building in Ottawa? I seem to remember something like that being mentioned in high school civics class, or maybe it was ancient history.
h/t to the Vanity Press, where this started as a comment.
Meanwhile, Jim Dandy Goodness takes something I said, and makes it all about the pussy.
And courtesy of Willy Loman: Ed Broadbent speaks, you listen
(crossposted from The Woodshed)
Posted by Unknown at 07:19 Recommend this Post