Manitoba Premier Gary Doer has, as a bit of a Christmas present, finally returned Manitoba's minimum wage to 1976 levels -- an inflation-adjusted $9:00 per hour. He's been boosting it steadily since he came into office in 1999. In the new year, a minimum wage earner working full time, 40 hours a week for 52 weeks, will make around $18,000 a year, before taxes. 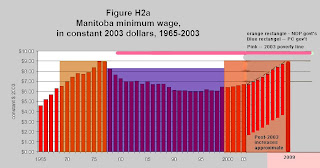 [Table nabbed from here and augmented to suit.]

Predictably, the Great and Might Oz .... sorry, the small businesspeople are upset.

The Canadian Federation of Independent Business is hoping the Manitoba government exercises caution as it determines what will happen to the minimum wage.

CFIB spokesman Shannon Martin says eight consecutive increases to the minimum wage have resulted in a 42 percent increase, well beyond the 19 percent increase in the Manitoba consumer price index.
Martin says just as the government is counting its pennies during these challenging economic times, so are businesses.

The Chamber of Commerce is upset, too.

But the Winnipeg Chamber of Commerce laments the decision to boost the minimum wage.

Chamber spokesperson Chuck Davidson said the rate just went up and another pair of hikes are a lot for small business owners to handle.

"The direction the economy is going, this isn't the perfect time for small businesses to have the extra pressure put on them," he said.

There are about 28,000 minimum wage earners in Manitoba, the government said in a news release, adding the 2009 levels will put Manitoba near the middle of the minimum wage rates among Canadian jurisdictions.

The 50 cent per hour increase, if a person worked full time, (and how many minimum wage earners work full time?) would afford him another pre-tax $1000.

A rep for the Chamber was on radio bemoaning this increase, and made the quaint argument that lower wages would allow small business to "help" more workers. He didn't actually say they would fire people because of the increase, but the possibility floated in the air, like grease in the alley air vents behind a MacDonalds.

But, could they? I assume that if a business in these trying times could get by with fewer hands, they would have nipped the extra hands already.

But there's another problem: a lack of customers.

A depression happens when business weakens, lays off workers, the workers stop buying things, making business sales weaker, making business lay off more workers, etc etc etc. A business might get by for a while if it's understaffed, but not if it is undercustomered. 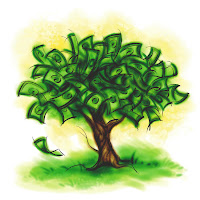 And where do customers get their money? From the money tree my mom used to tell me about? No, they get it either from outside sources (welfare, pensions, insurance, inheritance, armed robbery, etc) or from paid work.

Business has been busily sawing off the limb it's sitting on for the past thirty years. They have worked hard lobbying and using PR offensives to get government to reduce taxes, reduce social services, and reduce wages. And now to cope with "the direction the economy is going", they want to reduce all these things even more.

Each of them wants some other business to pay the good wages -- water the garden in order to cultivate customers for them. This does not work. Will they figure this out?

Well, they haven't figured it out yet, and they are highly trained (and paid) perfessionals.
Posted by Noni Mausa at 16:48 Recommend this Post