Would someone like to sing "Do they know it's Christmas?" 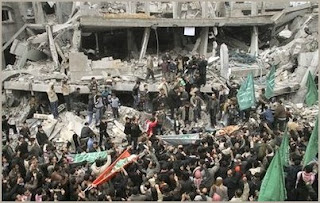 From Dec 27 to 29, 2008
Israelis : 5 dead, 31 wounded
Palestinians : 375 dead, 1500+ wounded
.
Haim Ramon, the deputy to Prime Minister Ehud Olmert :
"The goal of the operation is to topple Hamas. We will stop firing immediately if someone takes the responsibility of this government, anyone but Hamas. We are favourable to any other government to take the place of Hamas."
.
In 2004 Hamas won a majority in a democratic election.
In 2006 Israel jailed one third of the Hamas cabinet
.
Yossi Alpher, a former Mossad official, on the economic blockade :
"It has not manipulated Palestinians into hating Hamas, but has probably been counterproductive. It is just useless collective punishment."
.
Haaretz :
"Israel has always believed that causing suffering to Palestinian civilians would make them rebel against their national leaders. This assumption has proven wrong over and over."
.
Robert Fisk :
"One and a half million Palestinian refugees crammed into the cesspool of Gaza, 80 per cent of whose families once lived in what is now Israel. This, historically, is the real story: most of the people of Gaza don't come from Gaza."
.
Center for Strategic and International Studies via the G&M:
"Israeli leaders synchronized their retaliatory attacks to the political calendar in the U.S., thinking it was better to strike before President George W. Bush left office on Jan. 20 because they weren't as sure about what president-elect Barack Obama's reaction would be.
The governing Labour and Kadima parties are believed to want to improve their odds in coming national elections, demonstrating that they are as tough as hawkish Likud Leader Benjamin Netanyahu, who is currently ahead in the polls."
Cross-posted at Creekside
Posted by Alison at 06:32 Recommend this Post