First against the wall when the revolution comes: AIG executives.

Dec. 9 (Bloomberg) -- American International Group Inc., the insurer whose bonuses and perks are under fire from U.S. lawmakers, offered cash awards to another 38 executives in a retention program with payments of as much as $4 million.

The incentives range from $92,500 to $4 million for employees earning salaries between $160,000 and $1 million, Chief Executive Officer Edward Liddy said in a letter dated Dec. 5 to Representative Elijah Cummings. The New York-based insurer had previously disclosed that 130 managers would get the awards and that one executive would get $3 million.

“I remain concerned, as do many American taxpayers, that these retention payments are simply bonuses by another name,” Cummings said in letter responding to Liddy. AIG, which received a U.S. rescue package of more than $152 billion, has been criticized for saying it will eliminate bonuses for senior executives while still planning to hand out “cash awards” that double or triple the salaries of some managers. The payments are designed to keep top employees at AIG while Liddy seeks to sell units and pay back the federal government, which owns 79.9 percent of AIG.

...AIG’s managers have overseen a record $37.6 billion in net losses so far this year. Cummings has called for Liddy’s resignation and said AIG should provide names of those getting retention pay and explain why the awards are needed. Firms accepting taxpayer money shouldn’t enrich employees, he said..

Yeah, because when the senior management of the company steers the firm in losses of nearly $40 billion and forces the firm to seek a $150 billion bailout from the government, the last thing you want them to do is jump ship and work for someone else.
While I understand the importance of propping up all those struggling Porshe dealerships, caviar importers and executive country club operators that provide much needed greenskeeping and caddying jobs in these dark economic times, frankly I'd have a lot more respect for these people if they just drove up to Fort Knox in a convoy of trucks with masks and guns and cleaned the place out like honest thieves.

NEW YORK (CNNMoney.com) -- A record 1.35 million homes were in foreclosure in the third quarter, driving the foreclosure rate up to 2.97%, the Mortgage Bankers Association said Friday.

That's a 76% increase from a year ago, according to the group's National Delinquency Survey.At the same time, the number of homeowners falling behind on their mortgages rose to a record 6.99%, up from 5.59% a year ago, the association said. This means that one in 10 borrowers in America are either delinquent or in foreclosure

What would Woody Guthrie say? 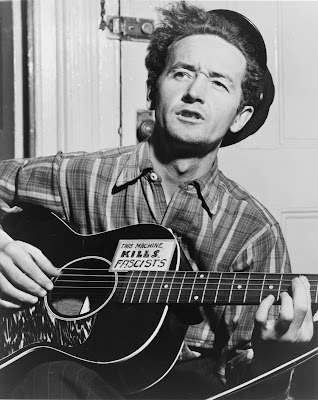 "Yes, as through this world I've wandered
I've seen lots of funny men;
Some will rob you with a six-gun,
And some with a fountain pen.

Email ThisBlogThis!Share to TwitterShare to FacebookShare to Pinterest
Labels: bailout, first against the wall, thieves, wwwgs