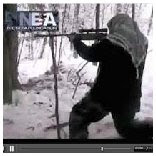 Footage of the Toronto 18/Paintball 11/Tim Horton's 10 has shown up on a US anti-terrorism website. It is presumably the same footage the Canadian judge declined to release to the media.
Now admittedly I haven't seen many terrorist promotional videos before - ok, none actually - but it's difficult to imagine that recruitment numbers sky-rocketed after watching this jolly bunch perform wheelies in a Canadian Tire parking lot and fall down in the snow.

"The NEFA Foundation has obtained exclusive footage of a would-be "terrorist training camp" that took place in a rural section of Canada in 2006. The camp, directed by CSIS confidential informant Mubin Shaikh, included members of the alleged “Toronto 18” terror cell, who are accused of conspiring to carry out a large-scale terrorist attack in southern Ontario, including plans for truck bombings and storming local buildings such as the Canadian Parliament and the headquarters of the CSIS. The video features footage of the men receiving instruction on the use of handguns, sniper tactics, and basic calisthenics. Crudely edited by its creators to include nasheed music, the video also shows the men practicing evasive driving maneuvers at night in an abandoned parking lot."

In reporting on the footage, the CBC at least notes that the weapons are paintball guns but neither CanWest nor CBC bothered to clarify that the lone handgun was provided by the first RCMP mole, who was paid $77,000 to set the group up for arrest and who went public on July 13th to declare that he was owed a further $300,000.
Nor, in reviewing the fertilizer sale, do they mention the role of the second RCMP mole, a former CSIS informant, who was paid $4.1M to arrange the purchase of ammonium nitrate on his credit card to be delivered to a warehouse he had rented himself conveniently located a hundred yards from the RCMP station. $4.1M seems like a lot of money, I know, but at least the RCMP whittled him down from the $15M he had originally asked for.
At the time of the arrests, Parliament was in the process of reviewing the new powers granted the police and security forces under the Anti-Terrorism Act, which would allow prosecutors to conceal evidence from the accused and their lawyers on the grounds of protecting national security. Prime Minister Harper personally thanked Bush in a telephone conversation the following Monday for the help provided by US authorities.
A verdict in the trial of the last juvenile arrested is expected next week.
Cross-posted at Creekside
Posted by Alison at 03:49 Recommend this Post