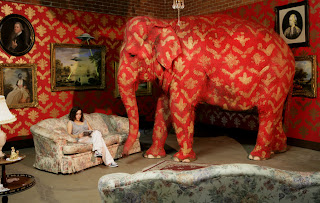 The elephant in the room of this election has been the US market meltdown, courtesy of the Republican elephant's love of ponzi schemes.
Yesterday Steve took time out from pretending to ignore it altogether to express his concern that we might not let him carry water for Uncle Miltie's neo-liberal fantasy economics any more :

"In a time of economic uncertainty, I do think the country needs a strong government that's able to govern," Mr. Harper told journalists in Toronto. "My concern is that obviously, going forward, that we have a government that's going to be sabotaged by a bunch of parties who don't want our economy to be successful."

Yeah, that's it, Steve, you utter prat. Why do the other parties hate Canada?
Speaking of sabotage, Steve, as an economist and PM, you have implemented de-regulation of food and airline safety and the abandonment of independent Canadian regulation and testing of pesticides and drugs. In fact your singular economic achievement since taking office has been to turn the $13B surplus you inherited from PM Martin into $60B in corporate tax cuts.
Decent short article on economic cycles : Teetering between Keynes and Friedman :

"When the pyramid starts crumbling, taxpayers must step in to refinance the banking system, revive mortgage markets and prevent economic collapse."

I'm guessing a surplus would be more useful here than your pledge to continue carrying water for that Republican elephant in the corner of the room.
Cue the hilarious How the markets really work one more time.
Image from Banksy
Cross-posted at Creekside
Posted by Alison at 03:09 Recommend this Post