Nobody likes the idea of a massive financial bailout of Wall Street. Nobody.

But after a week of chewing and farting, having to put up with a mental midget like McCain injecting himself into the process, it looked like there was going to be something palatable enough that all sides could hold their noses and agree upon.

The $700bn US bank bailout was today left in chaos after the House of Representatives voted down the plans.

After days of negotiations it had been thought that Democrats and Republicans had agreed a deal which could be passed by both the House and the Senate.

But in a shock vote the measures were rejected by 228 votes to 205.

In a scene of high drama the House briefly kept the vote open to give senior figures from both parties the chance to try and force those in opposition to change their minds. But within a few minutes it was announced the vote had been formally closed, leaving the plans in disarray.

Whether either side can find their way around this remains to be seen, but in the meantime the world's central banks aren't prepared to let everything sink into the abyss because of U.S. navel gazing.

Central banks around the world unveiled a plan to pump massive amounts of cash into the global banking system in a concerted effort to boost market confidence and inject liquidity into the global markets.

Which brings us to something Paul Krugman said about Milton Friedman, (that messiah of the unregulated free-market), in February 2007:

[H]e slipped all too easily into claiming both that markets always work and that only markets work. It's extremely hard to find cases in which Friedman acknowledged the possibility that markets could go wrong, or that government intervention could serve a useful purpose.

Krugman was being kind. German Finance Minister Peer Steinbruck minced no words during an interview with Der Spiegel:

In the end, unbridled capitalism with all of its greed, as we have seen happening here, consumes itself.

The Steinbruck interview is well worth the read, because if you think the 9/11 attacks on the US changed the world, according to him it was the pumping of tons of money into the US economy after those attacks which has led to the disaster that is the crashing free-market today. What has changed, in Steinbruck's view, is that New York and London are finished as world financial centres and an evolutionary shift will take place.

While US legislators start shucking and jiving trying to sort out how best to come to terms with the failure of a de-regulated and greed-driven market where the corporate head of a failed Washington Mutual stands to walk away with $19.1 million for 17 days work, some people have some other ideas as to how to start cleaning up Wall Street. 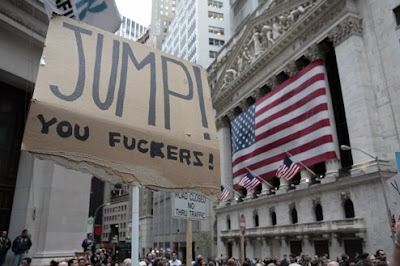