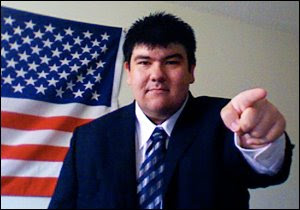 While it is hard to believe something this long could be written in crayon, it is even harder to believe that brain-dead, half-assed, prarie National Review wannabe paragon of conservative intellectual thought - the Western Standard -- would publish this magnum dopus by Adam Yoshida (seen at the left, just one step away from becoming one of these guys) in the midst of an election in which they want to make their guy look less scary to centerist voters.

"Do too much, rather than too little. Don’t shift these things around. Burn them down and salt the Earth. A future Liberal government won’t have the guts, the time, the wherewithal, or the money to recreate them all at once. Sell the land and the buildings. Shred the records. Disperse the staff. It’s easier to destroy than it is to create. A Tory government on a rampage could destroy in a couple of months what it took four decades to create – and what it would take another forty to recreate."

Reassuring isn't it? He burbles on about the need to triple the size of the Canadian Forces, get rid of the CBC, build a couple of aircraft carriers and crank up the Canadian military-industrial complex (no really, he calls it that)

PSA does a proper eviceration. One might think that this would be the craziest thing Adam has ever written and it just somehow slipped through the editing process at the Western Standard. Sadly, no.
Posted by Unknown at 05:54 Recommend this Post

Email ThisBlogThis!Share to TwitterShare to FacebookShare to Pinterest
Labels: Adam Yoshida, conservatives, fetch the dart gun and the net