9/11 changed everything about Steve's election campaign

"He does little mainstreeting, invariably makes announcements before small, hand-picked groups and addresses political rallies where every person in the audience has to register with officials from the local Conservative party organization."
Yesterday Harper explained why :

"Unfortunately, we live in an era where the Prime Minister of Canada faces strong security threats.... When we're dealing in an era of global terrorism and these kinds of things, there are a disturbing number of threats to the country and specifically to whoever occupies the office of prime minister. This is unfortunate but it's reality."

RCMP spokesperson : "The RCMP will respond to any situation that could potentially jeopardize the safety and security of the Prime Minister of Canada."
Why just last week Steve had to call on the RCMP to protect him from safety and security risks hiding in reporters' questions. Also at risk are all Con candidates who are approached by national reporters - particularly Dona Cadman, whose mouth is apparently under house arrest for her own protection - and several Con candidates who are unfortunately unable to safely participate even in local candidate debates.
Here Steve has sensibly set up a podium in the safety of a backyard in Richmond, BC. : But man, this Obama guy. Does he just not get the whole 9/11 "era of global terrorism" security thing or what? : 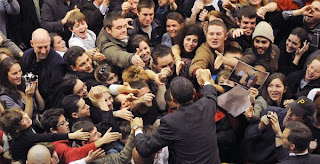 Cross-posted at Creekside
Posted by Alison at 06:56 Recommend this Post