LIKE, I'M WATCHING a YouTube video of Carla Bruni, and in the background, on TV, there appears Stevie. The sound's off, so Carla prevails. It's all opinion, a solipsist's by-product, but mine is that she is a delightful musician, and technically, pretty good on guitar (should be, considering E.C.'s positive influence) in the clean-and-simple school.

The video ended, but Stevie was still grinding on, concluding his pitch, and that got me to pondering. What was Mrs. Stevie all about? I didn't even know her name — Laureen, as it turns out.

So, I went and found some pictures. You will note that I refrained from any Carla "glamor" shots. Perhaps one should not judge a book by its cover, but that's publishing for you. You can probably figure out who's who. 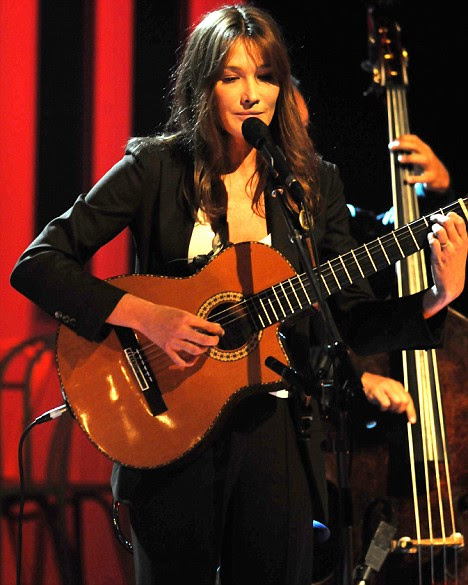 Aw, to hell with it.

FWIW, if you can't afford to race sportscars or powerboats, playing rock n' roll is just about the most fun you can have with your clothes on. That's just my opinion, of course, but at 59, I still get the same rush I did at 20 when I plug into that 200w stack with my Telly and crunch out that first chord. As the song goes, it's only rock n' roll, but I like it. Speaking as a heterosexual middle-aged guitar hacker, I know who I want to play with, but that's just me. I'm sure Laureen does great chicken soup, though.
Posted by Edstock at 09:28 Recommend this Post