The technology is starting to come out of the woodwork 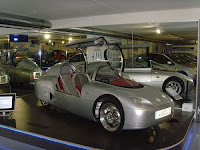 Well, the Black Forest perhaps. Certainly not Detroit or Oshawa.

Volkswagen has had a concept car on the shelf since early 2003 that consumes slightly less than 1 litre per 100 kilometers. That's 283 miles per gallon (imperial).

And now, finally, VW is going to build them (in limited numbers to start) (MPG figures are US gallons)

There’s been talk about the VW 1L concept for years. Since VW built the original, fuel economy, safety, price, and release date has been speculated upon and argued about, and I’d finally stopped thinking it was ever going to happen. However, according to VW’s CEO, it should hit the market in 2010.

The VW 1L is so named because, in theory, it only consumes one liter of fuel per 100 kilometers traveled. For those of us in the US, this translates into about 235 MPG. Definitely far and above anything on the market currently. The concept, developed in 2002, actually got better fuel economy, scoring a sweet .89L/100km in VW testing. It’s likely to use more fuel in real world use, but with that kind of mileage in testing it’s unlikely that anyone would complain about an “unsatisfactory 200 MPG.”

Back in 2002 VW challenged engineers to develop a concept car that produced consumption in the range of 3 litres per 100 km. When they placed their finished experiment on the show floor they had surpassed that requirement and produced an automobile that has better fuel economy than any of the current hybrids.

And it's been sitting on the shelf.

VW will be producing these vehicles on their "concept" production line which, even going full bore, can only produce 1000 cars per year, so don't expect these to dominate the automobile market anytime soon. Because of that, the price for an original version will be in the Euro 30,000 range. Once they go into mass production however, the price will be somewhere under Euro 10,000.

The VW 1 Litre has a one-cylinder engine and a top speed of 120 km/h, making it a good city driver and still highway capable.

You can still get a Hummer.... from GM. For a while. If GM survives.

More pictures of the VW 1 litre