The 10 Most Awesomely Bad Moments of the Bush Presidency 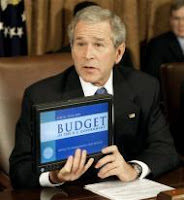 Brad Reed, of Sadly, No! has produced a short version of the last 7+ years focusing on the 10 most awesomely bad moments which floated to the surface of the Bush presidency.

Essentially, I tried to rate each Bush disaster by two main criteria: its body count and its damage to the country's reputation. So while Bush's awkward groping of German Chancellor Angela Merkel may be personally humiliating to everyone, it doesn't have the same heft as, say, the Iraq War.

Those are the ones that didn't make the list.

Go read. It's well worth it.