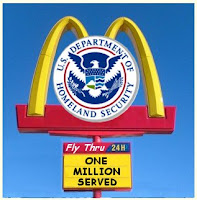 The Transportation Security Administration denied the report and began an investigation into who leaked the info to CNN, calling it a national security leak.

Then it placed the CNN reporter on the no-fly list.

And in this way the US terrorist watch list eventually reached one million names, according to the ACLU, who call it a waste of time and resources.

Paul Craig Roberts : "It's worse than that. What the “watch list” or “no-fly list” is doing is training Americans to submit to warrantless searches, to abandon their constitutional rights, and to submit to humiliation by thugs and bullies."

Yes. They are being acclimatized to what they know is merely bureaucratic bullying. Are we paying attention?