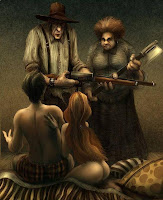 Heh! Gary Law adds something scary to chew on after Kathryn Jean Lopez gets all sentimental as she pines for the days when girls were virgins and fathers were, well, knee-capping hillbillies.

Where’s Dad? Not the “fathers” of these unfortunate pre-borns, but the fathers of these pregnant girls. Where, in other words, is the shotgun? Back in the day when birth control and abortion weren’t readily available to high-school kids, fathers were pretty good deterrents to pregnancy. Boys knew they’d have kneecap problems if they got daddy’s little girl pregnant. If they were lucky, they’d be married by the morning after. Girls, meanwhile, were less likely to risk pregnancy because alternatives to motherhood were few, adoption being the most likely. It wasn’t a foolproof system, clearly, but the specter of lifelong consequences, combined with societal and parental disapproval, helped keep the illegitimate birthrate down. Today, using the term “illegitimate” is more likely to spark disapproval than the activities contributing to the plague of unwed pregnancies. For sure there are far fewer fathers around to give young males The Eye.

The Eye? Or, more to K-Lo's liking, the baseball bat.

What got K-Lo going? Well, the pregnancy pact of 17 girls in the town of Gloucester, Massachusetts (see below for more on that). More of K-Lo:

It is a fair guess, though not possible to confirm at this point, that at least some of Gloucester’s pregnant daughters are from fatherless homes.

Yoiks! She doesn't know, so she makes it up.

Today’s girls and boys daily marinate in a culture that offers little instruction in responsibility and self-control — or the importance of marriage as antecedent to procreation — but celebrates single motherhood and encourages sex without strings.

Shorter K-Lo: Pre-marital sex is the result of the current culture. They're not being taught to repress their sexual urges the way their grandparents and parents did when they were adolescents. Why, look at the movies they see!

“Trends in Premarital Sex in the United States, 1954–2003,” by Lawrence B. Finer, published in the January/February 2007 issue of Public Health Reports.

That would be like, you know, a scientific study. I-wonder-what-it-says? (drum roll)

“This is reality-check research. Premarital sex is normal behavior for the vast majority of Americans, and has been for decades,” says study author Lawrence Finer, director of domestic research at the Guttmacher Institute. “The data clearly show that the majority of older teens and adults have already had sex before marriage, which calls into question the federal government’s funding of abstinence-only-until-marriage programs for 12–29-year-olds. It would be more effective to provide young people with the skills and information they need to be safe once they become sexually active—which nearly everyone eventually will.”

Yup. Even some of the student body at Dominican Academy were probably... ahem... experimenting.

But not K-Lo! Nosiree! She didn't stray down the sinful path seeking pleasures of the flesh. Oh, I'm sure she had her schoolgirl crushes, but what's the harm in that?

Boris Yeltsin's death on affected me in a way that was surely unique: He was my high-school crush.

Yes, I am serious. If you opened my locker at Dominican Academy in New York City, you would have found a picture of Yeltsin torn from Time magazine, as if it were a Tiger Beat cover featuring Kirk Cameron.

And if Boris Yeltsin, a man old enough to be my grandfather, had suddenly appeared at Dominican Academy, well... it's too painful to visualize. But it's very healthy... no?

K-Lo apparently hasn't bothered looking at the results of those "married by the morning after" shotgun weddings. Between 1960 and 1980 the US divorce rate tripled. At least 23 couples per thousand weren't terribly happy in their relationships and surprisingly, a lot of those couples were in longer term marriages. (Should we count the "premature births" that occurred among that number?)

Another thing she missed, (You can do that when you're rubbing a picture of Boris on your chest), was the data accumulated by the National Campaign to Prevent Teen and Unplanned Pregnancy. Oh, would you look at that! Since 1981 the teen pregnancy rate was actually declining in the US... until K-Lo's other hero expanded abstinence only sex education. By 2006 a sudden and sharp increase in teen pregnancy set back a steady 14 year decline.

And as to K-Lo's assertion that in the Leave It To Beaver days "Daddy's got a gun; we can't have no fun" resulted in fewer teen pregnancies, there is this real-live, honest-to-goodness analysis which says.... BS!

I know. Another conservative myth busted. But then, life isn't a Warner Bros cartoon. K-Lo on the other hand, is.

And while we're at it: (Thanks to Pogge in comments) While K-Lo was busy having the vapours and crunching her rosary beads about the Goucester "pregnancy pact", Lindsay had already ripped the story to shreds. In fact, she did it two hours earlier. In fact, there was no pact.

"There was definitely no pact," Lindsey Oliver, 17, who became pregnant when she was a junior, told ABC's "Good Morning America" today. "There was a group of girls already pregnant that decided they were going to help each other to finish school and raise their kids together. I think it was just a coincidence."