Where is the USS Jimmy Carter? 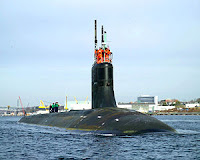 Why would I care? Well, for a couple of reasons. The USS Jimmy Carter isn't just any old run-of-the-mill nuclear attack submarine. No, no. The Jimmy Carter (SSN-23) is one hot piece of kit. It is the one submarine in the US fleet which is designated a Multi-Mission Platform and is purpose built to carry out a number of roles in special warfare, undersea surveillance and other really sneaky stuff.

In short, USS Jimmy Carter, roughly 100 feet longer than its sister boats of the new Seawolf-class because of its unique role, is a spy machine.

What does this have to do with anything? Well, first of all, the sheets and pages of information on USS Jimmy Carter's multi-mission capabilities have all disappeared off the US Navy's sites. Even the commissioning announcement at Commander Submarine Group Two is gone.

The second thing is this:

Internet services in Qatar have been seriously disrupted because of damage to an undersea telecoms cable linking the Gulf state to the UAE, the fourth such incident in less than a week. Qatar Telecom (Qtel) said on Sunday the cable was damaged between the Qatari island of Haloul and the UAE island of Das on Friday. The cause of damage is not yet known, but ArabianBusiness.com has been told unofficially the problem is related to the power system and not the result of a ship's anchor cutting the cable, as is thought to be the case in the other three incidents.

Well actually, there is no evidence that ships anchors did anything of the sort. In fact, Egypt says ships did not sever the fiber-optic cables.

Two cables were damaged earlier this week in the Mediterranean sea and another off the coast of Dubai, causing widespread disruption to internet and international telephone services in Egypt, Gulf Arab states and South Asia.

Egypt's transport ministry said footage recorded by onshore video cameras of the location of the cables showed no maritime traffic in the area when the cables were damaged.

"The ministry's maritime transport committee reviewed footage covering the period of 12 hours before and 12 hours after the cables were cut and no ships sailed the area," a statement said.

Those cables are about the width of a normal human thumb. And a ship's anchor would indeed rip right through one. But four? In three different locations in under a week? Run that little coincidence by any police detective and ask what she/he thinks.

So, at the risk of perpetrating a conspiracy theory, I will state that I am highly suspicious and until someone can point at USS Jimmy Carter snuggly alongside at its berth in Bangor, Washington, the Bush administration becomes as strong a suspect as any other possible perpetrator. There is also the fact that USS Jimmy Carter was due to become operational this year.

The Jimmy Carter, interestingly, is purpose built where its predecessors were regular attack subs modified for specific jobs. USS Parche was equipped with a set of pick-up arms designed to rip an armoured fiber-optic cable from its meter deep trench and tap into it. As a matter of certain knowledge, the USN did exactly that with submarines on Soviet undersea copper cables during the cold-war. They conducted a successful tap on the Soviet navy's Pacific Fleet headquarters when they tapped an undersea cable in the Sea of Okhotsk, which was discovered by the Soviets and another of the Kola Peninsula tapping into the Soviet Northern Fleet headquarters which remained undiscovered.

There have also been leaks which state that the US National Security Agency tapped a fiber-optic undersea cable with some success. The problem was the flood of information which NSA computers were unable to handle at that time.

Former intelligence officials say the agency made its tap with the help of a customized sub. "It's a submarine capable of bringing a length of cable inside a special chamber, where the men then do the work," while the sub hugs the ocean floor, says one former official. The surface ships used by undersea-cable companies to install and repair cables have similar chambers--called jointing rooms--where crews work on the delicate fibers. When repairing a broken cable, cable companies generally lift one end of the rupture to the surface and into the jointing room, splice in a new length of cable, then lift the other end of the rupture and repeat the process.

In fact, it is unlikely the Jimmy Carter would actually bring the cable into the submarine. Aside from being a gargantuan pain-in-the-ass it's risky. However, given the dimensions of the Jimmy Carter, it is probably equipped with a lock-out system which would allow operations to occur outside the sub.

That's not proof, however, and it still doesn't explain a total break in the fiber-optic lines. Well, not quite. There is a possible explanation.

Whenever there is a tap on a fiber-optic line, there is a temporary interruption in the information stream. Although short, the operator of the system can detect it. In fact, they would see it instantly because the data-rate would drop immediately raising an alarm. There is also the fact that most cable operators diverge their systems by using two separate lines to stream data. The geographic routes of these lines are far enough apart that any rupture can be handled by rerouting data on the other line.

That's what makes the breaks so suspicious. The last two breaks interfered with the secondary cable routes.

If I were conducting an intercept operation requiring an undersea fiber-optic cable splice which I knew the cable operator would detect, I need a way to prevent that operator from detecting it. Create a diversion.

By disabling the cable, either by severing it underwater or creating a problem ashore, it gives me time to do my splice undetected in a location far away from the diversionary problem. When the cable operator says it will be days before a repair ship can get to it, that gives me plenty of time to get the job done and get out of the area.

So, if I'm right then all we have to do is find USS Jimmy Carter. If I'm wrong, I've just given the NSA a strategy for making undetected taps. On the other hand, it might just be the most concerted attack on the global fiber-optic network by merchant ship anchors in history.

If you actually knew all the weapons of mass destruction that our military or other country's have we would never be able to leave our houses or even live our life's. We have to enjoy and embrace what we have. If we always find things to be afraid of we will never enjoy our life's. Jimmy Carter disappearing from records is very strange and almost like the twilight zone.