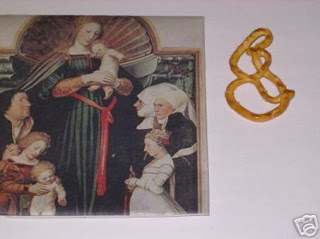 Via Shakesville yet another piece of warped food has become a religious symbol worthy of more than its price per ounce.

Pretzel owner Michael Fleming told KVAL that he found the pretzel in a bag of Rold Gold three years ago. "People seemed generally moved by these images," says Fleming. "And they really seem to believe that the Virgin Mary is before them."

Fleming has been hanging onto the pretzel for three years, presumably to get as much quality time with it as possible before he.... released it to the world.

He's getting some help getting it out there - on eBay. Assisted by Eugene Oregon rock station KFLY disc jockey Tanner Haney.

DJ Tanner Haney could not be reached for comment. He told KVAL TV in Eugene "we're kind of capitalizing on the stupidity of eBay and that people will buy anything." He hosts the Donkey Show from 2 to 6 p.m.

Do you see it? Click on a meatball for more. 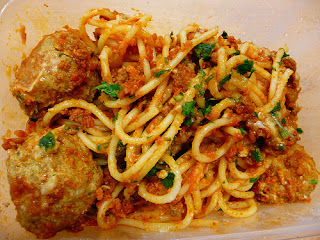 Email ThisBlogThis!Share to TwitterShare to FacebookShare to Pinterest
Labels: bizarre