Now that's what you call a protest 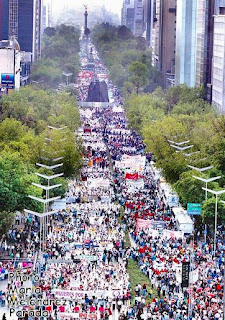 
They were demanding that the Agricultural Chapter of NAFTA be renegotiated, the privatization of the energy sector be halted, and that the new Social Security law be repealed.

Common Frontiers Canada :
"The Globe and Mail has a mention of the march in today's Report on Business section where the crowd is described as "Thousands of mexican farmers...".
The Toronto Star didn't carry the story at all."

Cross posted from Creekside
Posted by Dave at 20:21 Recommend this Post