Killed, wounded and living in fear

I know what you think you're going to read. Put that aside. This is not about some grubby hole 10,000 miles from where you sit. This could be next door. It might even be where you live.

Compare the raw numbers. In the same seven-year period when 4,588 U.S. soldiers and police officers were killed by hostiles or by accident, more than 8,000 women – nearly twice as many – were shot, stabbed, strangled, or beaten to death by the intimate males in their lives. In Canada, compared to the 101 Canadian soldiers and police officers killed, more than 500 women – nearly five times as many – met the same fate.

In the United States, it's conservatively estimated that in addition to the 1,200 to 1,300 women killed each year by intimate partners, another 5.3 million, age 18 and older, are victims of non-lethal domestic abuse.

Based on those numbers, the violence costs the country more than $5.8 billion annually – nearly $4.1 billion in direct medical and mental health care, and $1.8 billion in lost productivity and lost earnings due to homicide. 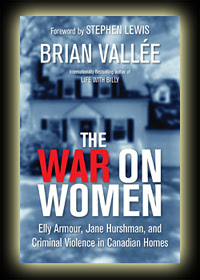 These numbers are believed to underestimate the problem for several reasons, and additional efforts are needed to determine more accurately the full cost of intimate-partner victimization of women in the United States.

In Canada, the federal government estimates the annual cost of violence against women at $1.1 billion in direct medical costs alone. That figure rises to more than $4 billion a year when social services, lost productivity, lost earnings, and police, court, and prison costs are factored in.

Wars usually produce large numbers of refugees: witness the United Nations camps scattered around the world. And the War on Women has its own refugee camps, in the form of the 2,500 or so shelters for battered women and their children across North America.

That is an excerpt from the book The War on Women: Elly Armour, Jane Hurshman, and Criminal Violence in Canadian Homes, by Brian Vallée.

Antonia has more. A lot more. Go read.
Posted by Dave at 22:11 Recommend this Post