She was dressed! We can do better than that. 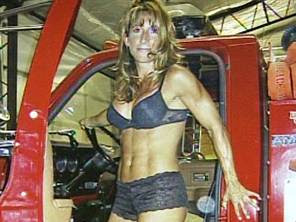 The (former) mayor of Arlington, Oregon has lost her seat in a recall vote.

Photographs of her which appeared on a MySpace page. She was wearing a bra and panties which the voters of the small Oregon town thought was an inappropriate rig for a mayor. Never mind that the photos were taken before she ran for office.

The mayor of a small Oregon town who came under fire for racy pictures of her posted on the Internet was recalled in a close vote Monday.

According to the person who spearheaded the recall drive, Ron Miller, the vote was 142 in favor and 139 against the recall of Mayor Carmen Kontur-Gronquist.

She came under fire after she posted photos of herself posed in lingerie on a fire truck on her MySpace page.

Ummm. You folks in Arlington are a bunch of amateurs. Really.

Kontur-Gronquist, who is quite clearly one very fit woman, is positively overdressed compared to the standard set by at least one Canadian small-town mayor. (Not safe for work)

That is Her Worship, the mayor of Houston, British Columbia, Sharon Smith. Note: she is wearing absolutely nothing but her ceremonial chain of office. That's right. That photo was taken while she held office.

She still has her job.

You folks in Arlington haven't heard the best part yet. She's has close ties to the Conservative government of Prime Minister Stephen Harper. That's right. She's a conservative. We expect she'll be running for a federal seat in the next election.

Our bitch with her was that she was a participant in a constitutional scam. We took that seriously.

I suppose if Kontur-Gronquist had posed in an even skimpier swimsuit it would have been different... for some reason that escapes me and none of you could possibly explain.
Posted by Dave at 22:56 Recommend this Post