"Skew"-ered. Are you prepared for the big one Mrs. Cleaver? 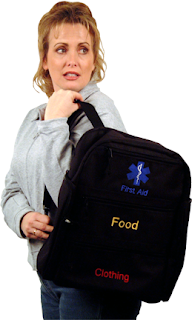 It would seem that only 4 percent of us have the kind of safety kit that Public Safety Canada thinks we should have. That would be the same PSC over which story-teller Stockwell Day hovers.

Apparently the reason for our negligence has been identified. So, PSC is going to target the one group who hasn't responded.

The "Is Your Family Prepared" campaign, launched in the fall of 2006, is being tweaked this year in an attempt to convince more people to have a fully stocked emergency kit in their homes, according to a new request for proposals issued by Public Safety Canada.

"Only four per cent of Canadians have all the kit contents that PSC asks for as a basic kit," reads the request.

"The plurality of (opinion poll) respondents still think that they only need to be prepared for 24 hours."

The government is looking for outside help to run the upcoming phase of the campaign, which will include $2.1 million in ads over 12 months. It will target "parents, with a skew toward women" in the middle income and age brackets, with the message that "if you don't prepare yourself or your family for an emergency, you are placing at risk the lives or well-being of your family," the documents say. (Emphasis mine)

A skew towards women? That's an outward and blatant blame-game.

If disaster strikes when you're out shopping or (gawd forbid) at your little job, you will be expected to rush home and deploy the supplies. It is your domain. You are responsible for house, home and children.

Men, you will finish your beer. Put all thoughts of home out of your head. You will not worry about the children. (Hell, you don't care about them anyway, right?). Rescue. You will do rescue, and fight fires, and manly stuff. They'll be wanting the sandbags and chainsaw in the back of your pick-up. When you do get home, your woman will have things under control. You just pull out the unregistered 30.06 and get ready to hold off the marauding hordes of young single folk who never got the word.

Thanks... I think... to a very pissed-off Cheryl for the tip.

Email ThisBlogThis!Share to TwitterShare to FacebookShare to Pinterest
Labels: disaster, safety, women in their place