One Person, One Body, One Count. Whatever is happening in her body is a part of her. 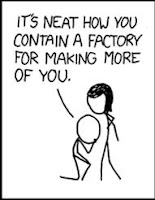 I do know that the legislation he is proposing with Bill C-484 is nothing but a copy of the Christian Dominionist social conservative US Republican garbage intended to provide human status to something that has yet to take a breath.

I have read Epp's defence of his bill in the comments section of a gut wrenching post. Right here.

I appreciate the comments people are making on my Bill. However, I plead with them for compassion. My bill specifically and explicitly excludes consensual abortion. It applies to the case where the woman has DECIDED NOT to have an abortion. She has CHOSEN to bring her pre3gnancy to term, and to give her child birth, care and love. Do you really believe that your case for consensual abortion is so weak that you have to sacrifice the right of a woman to choose to maintain it? Surely the ultimate denial of a woman’s right to choose is to have her pay with her life for CHOOSING to have a baby!

Please read the Bill. See that it is totally focussed on the victims. See that it cannot possibly be used to charge a woman for anything that SHE chooses to do in this regard. See that the charges only apply when the mother-to-be is the victim of a criminal act. Please think. Here is a woman who has no support in our criminal code for HER CHOICE at the present. This is for her, her family, and the unborn child that was taken away from them by a criminal act, against her will, without her consent, and with violence which she most obviously has not chosen.

Mr. Epp, with all due respect, horseshit. You know it and I know it.

Take a read here and explain how your bill will improve matters, Mr. Epp.

As it stands, though, the Criminal Code already allows for more severe sentencing when the victim of an attack is pregnant. Hive off the aggravation charges to a separate charge related to the fetus, and you’re back to a shorter sentence since criminal sentences in Canada typically run concurrently.

That's not a guess. That's Canadian law and its administration.

The force of your bill, sir, is to make a woman less of a person than the potential human she is carrying. Feel free to read the word potential one - more - time.

If you were a good lawmaker, and I have no evidence to support your record in that regard, you would be well aware of what has happened elsewhere when similar bills found their way past the sanity of legislative process.

And if I might be so obnoxious as to provide you with yet another line of thought, one should be asking why it is that you are so concerned with what is happening inside the body of a woman. It's not your body; it's hers.

When, exactly, did a woman become only the contents of her womb? She is a fully formed life, a person who is known and loved by those around her. When this woman dies violently, long before her time, she’s missed for who she was and who she could be ... not for the fetus she carries. Why isn’t that important enough? Why aren’t women important enough? Answer me that, you anti-choice misogynist.

Yes, I know. Another emotional female... who read your intentions like a book.

This has been dealt with at length by many. But the fact is, Mr. Epp, you are trying to squirm past the definition provided by the Supreme Court of Canada. You didn't get your anti-abortion bill and you've found a sleazy way to try and make it work. The ad-men who put this together for you should be so proud because they did something most decent lawyers wouldn't touch with a ten-foot pole.

I suppose, Mr. Epp, that any group of multiplying cells in a persons body requires protection. A man, for example, with testicular cancer has cells multiplying in his reproductive organs. At least, that's what it looks like.

But what if it's the second coming of Christ forming in a man?

Work on it. And check your religious beliefs at the door before you start meddling with my secular legal structure.

Readers: Go here and demand that Stephane Dion whip the vote against this odious bill.

Graphic shamelessly stolen from LuLu.
Posted by Dave at 23:45 Recommend this Post