It's already a disaster... 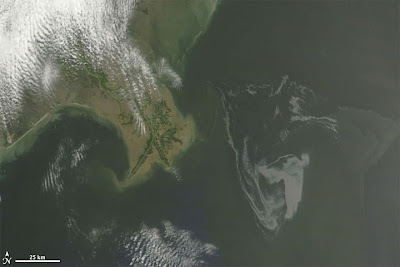 It's now on it's way to becoming something a thousand times worse.

At the time of writing this was the surface analysis provided by the Ocean Prediction Center.

That stationary cold front is going to cause south east winds to persist into the night and perhaps well into tomorrow when they are expected to shift to the south and diminish somewhat. That is blowing directly onto the US Gulf coast.

The forecast out of NOAA for the offshore Gulf of Mexico is fairly consistent.

That would suggest that things are improving. At least from a surface weather point of view. The oceanographic picture is a little less promising. 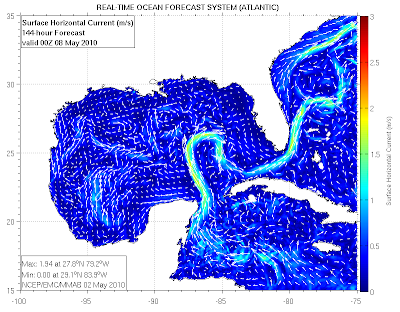 You can click on the image to enlarge it and if you'd like to see an animation go here.

That is the Caribbean Loop Current and if the oil gets transported into that, (and given the amounts of oil spewing out that is extremely likely), at worst it can move out into the Atlantic; at best, it will likely get into one of the counter-currents along the coast and deposit crude all along the Gulf coast. In short, the Bahamas could end up wearing a good part of this thing if the flow of oil isn't stopped quickly. (There is a possibility that if the spill was contained now, dispersal, evaporation and oxidization might prevent a spread into the Atlantic. However, as Boris pointed out, that is highly optimistic.) As the winds ease and shift to the southwest the surface transport will deflect further to the right, not to mention that the deeper one goes the further clockwise the transport. Any submerged oil is going to be pushed out into the current.

Mixing.
Crude oil and water don't mix particularly well if you simply lay the oil on the water. However, take the warm waters of the Gulf of Mexico, crude oil, rough weather and wind, and you start to develop a goo referred to as "mousse". The stuff is extremely sticky as a result of water trapped in balls of crude oil. Once it comes ashore it is a nightmare to clean up.

Hurricane season is just around the corner.
Granted, it's only the start of the season and the probability of a significant tropical revolving storm is fairly low. However, if, as has been stated, it takes months to staunch the flow of oil, that adds to the disaster picture.
Posted by Dave at 15:06 Recommend this Post