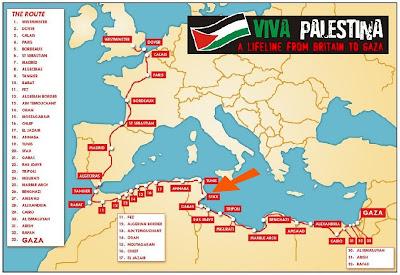 According to the map, they're more than half way there.
.
On Valentines Day, British MP George Galloway and a mile long convoy of over 100 donated vehicles packed with practical aid for Gaza left the Houses of Parliament in London to drive 5,000 miles through France, Spain, Morocco, Algeria, Tunisia, Libya and Egypt.
The convoy includes a fire engine donated by the Fire Brigades Union, 25 ambulances, 2 buses, a boat, and trucks filled with a £1-million of medicines, cash, tools, clothes, blankets, and shoe-boxes filled with gifts for children, all donated to the people of Gaza. Thousands of dollars in donations have also come from the U.S.
.
As my arrow shows, they are currently in Tunisia and by tomorrow will reach Libya. The plan is to cross the border at Rafah into Gaza in early March, donate their booty and vehicles, and then fly back to their countries of origin.
.
What a remarkable undertaking.
.
There have been, as you might imagine, adventures ...
Nine volunteers together with their cargo and vehicles were arrested under anti-terrorism laws before they even left the U.K. Six were released the following day, 3 on the following Wednesday, and the police detachment which made the arrests provided financial assistance to help them catch up with the convoy.
They all attended a rock concert in Madrid.
The border between Algeria and Morocco, closed for 15 years now, was specially opened to allow the convoy through. Algeria donated their fuel and Morocco their food and lodging.
.
Read more at the Viva Palestina! website or the daily blog.
And sign their petition for more media coverage! For shame that a multi-faith, multi-national effort of such tremendous goodwill should not be making headlines.
.
A big hat tip to Lagatta at Bread and Roses.
Cross-posted at Creekside
Posted by Alison at 07:48 Recommend this Post