Mr. Dithers may have saved the Canadian banks 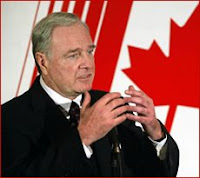 Reach way back, a decade or so, and recall the battle that suddenly erupted when the Royal Bank of Canada announced that it was merging with the Bank of Montreal. It's not that then RBC chairman John Cleghorn asked whether he could merge his federally chartered and regulated bank with the federally chartered and regulated Bank of Montreal. He simply let it be known that it was going to happen.

There was something of an "I say, old boy, you won't stand in the way of things we know are perfectly logical and much too complicated for the plebes and you government types," attachment to the pronouncement given that no Canadian chartered bank could actually do such a thing without the permission of the federal government.

Then federal finance minister, Paul Martin, was having none of it. And it may be that his reaction and decision to rein in the merger-hungry chartered banks set a tone which would save Canadian banks from future disaster.

In one swoop, the finance minister made it clear that government, not business, will decide what shape the country’s banking sector is allowed to take in the years ahead.

Martin's decision had nothing to do with the current financial wreckage in specific terms but it did send a message: Banks will continue to toe the regulatory line and that line will be drawn by government.

Indeed, Canadian banks, through their investment arms, were dealing in US subprime mortgaged-backed bad paper in varying degrees, but their core banking practices had to meet the requirements of the Bank Act and that may well have saved them, and us, from an unmitigated disaster. While Canadian bankers drooled over the idea that they could make tons of money if only they didn't have to bear the burden of excess government regulation, (which bankers claim is politically driven rather than a means to protect financial consumers,) US and European banks were enjoying increased de-regulation, something Canadian bankers point at as putting Canadian banks in an uncompetitive position.

What the Canadian chartered bankers don't tell you, however, is that the position they hold, (and have held,) in the Canadian market is somewhat unique. Unlike some of the regulated US banks they point at (well, used to point at) longingly, Canadian federally chartered banks are already branched. Many US banks were confined by state regulations which denied them opportunities across state boundaries. De-regulation in the US allowed consumer banks to merge and branch in several states, something Canadian banks already enjoyed. What Canadian chartered bankers won't point at is that during the height of the US bank merger-fest, many of those banks were grossly under-capitalized and some were carrying paper which would turn out to be worth less than the cost of the ink on the page.

It should come as no surprize then that suddenly the so-called over-regulated Canadian banking system is the envy of the global consumer banking sector and considered one of the most stable in the world. In fact, when Canadian banks have attracted the attention of the editor of Newsweek International, Fareed Zakaria, you might say they're a force to be reckoned with because they're so well regulated.

Canadian banks are well capitalized and poised to take advantage of opportunities that American and European banks cannot seize. The Toronto Dominion Bank, for example, was the 15th-largest bank in North America one year ago. Now it is the fifth-largest. It hasn't grown in size; the others have all shrunk.

So what accounts for the genius of the Canadians? Common sense. Over the past 15 years, as the United States and Europe loosened regulations on their financial industries, the Canadians refused to follow suit, seeing the old rules as useful shock absorbers. Canadian banks are typically leveraged at 18 to 1—compared with U.S. banks at 26 to 1 and European banks at a frightening 61 to 1. Partly this reflects Canada's more risk-averse business culture, but it is also a product of old-fashioned rules on banking.

Old-fashioned rules. Although I don't suppose any of the chairs of Canada's chartered banks will be sending any "thank you" notes out to Paul Martin any time soon.

If you need to do a historical catch up, try these: