NAFTA has made us patsies

This week the Canadian American Business Council will be running this full-page ad in the New York Times, the Washington Post, and the National Journal, in advance of Obama's visit to Ottawa. The purpose of the ads, according to CABC, "is to remind Americans about how important Canada is and how intertwined our interests have become."

The ad prominantly features a famous quote from John F. Kennedy during his visit to Canada in 1961 : "Geography has made us neighbours ... economics has made us partners "

and states : "Canada is poised to securely supply even more oil and natural gas to the U.S"

There's lots more quotes about the importance of North American economic integration from our Canadian ambassador to the US/chairman of the CABC advisory panel but you get the general idea.


There are of course dissenters ...

Thomas Walkom writes in The Star that Harper, abetted by Iggy, is using the budget implementation Bill C-10 :

"to introduce measures to weaken environmental laws affecting rivers and lakes, limit federal oversight of most foreign investment and scale back some of Canada's few remaining restrictions on foreign ownership."

Two days ago a coalition of unions and religious, environmental, student and social justice organizations sent a letter to Harper urging the renegotiation of NAFTA. It specifically calls for the elimination of the energy clause requiring Canada to continue to export oil and natural gas to the U.S., even in times of crisis, and the scrapping of the Security and Prosperity Partnership which "has excluded Parliamentary oversight, lacked any consultation with civil society, and led to further deregulation that has benefited only corporations."

On Tuesday Bruce Campbell, director of Canadian Centre for Policy Alternatives, will also call for a revamping of NAFTA :

His report, titled The Obama Effect, urges Ottawa to, among other things, work to exclude water from NAFTA and ban bulk water exports, as well as putting more emphasis on ensuring basic public services like medicare and education can be expanded without risk of NAFTA challenges from foreign investors.

Without those NAFTA changes and the scrapping of the now even more secret SPP corporate advisory panels, that ad from CABC actually reads more like this :
. 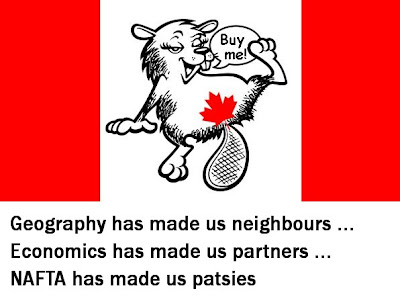