Neocon tries to vanish himself - fails 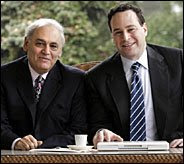 A conservative audience was entertained by one of their own doing what he has always done best - spew out a line of toxic lies. Only this time, he was lying about himself.

This has caused no end of incredulity in the American progressive blogosphere.

Spencer Ackerman suggests a different approach: Ignore the sonofabitch. If you're not going to put him on trial for war crimes then consign him to irrelevance.

Treat Perle like you treat the men in colorful robes who stand in front of the subway claiming to be the lost tribe of Israel, because he’s just as foolish and conspiracy-minded.

Conservative groups looking for entertainment might do better hiring a real comedian. At least the routine is closer to the truth than anything they're ever going to hear out of the sewage that didn't get flushed with the Bush administration.

Nothing they can say can be of interest to anybody. Attending a lecture to try to find out "how their minds worked" is a waste of time. What is plainly obvious is that the neocons pulled themselves into the desk lacking some basic human traits. They left their minds and morals at the door while they pursued a flawed ideology.

Email ThisBlogThis!Share to TwitterShare to FacebookShare to Pinterest
Labels: conservatives sure are funny, perle