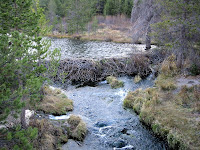 It's been a while.

I have only one regret and that is that I told my co-bloggers that I would resume contributing to these pages by early December 2008. I don't need to point out today's date and the fact that I failed to meet that chronological commitment.

All failures require an excuse and mine is easily constructed.

From the point of view of those who would visit intent on reading the jumble of words I might produce it might appear that I withdrew from the world. That would be an erroneous position. In fact, my world became unbelievably large and, at points along the past few months, highly frenetic.

Details would be worthless. And boring.

Suffice to say that a long-distance physical move, (and all the accompanying financial, administrative and domestic headaches), a work-life that required as much concentration as I could muster and the need to occasionally sleep took a deep gouge out of the free time available to comment on "larger issues". Far from withdrawing from the world, or finding life some kind of misery, I actually found I had re-entered the real world with an energetic need to explore it more closely.

No less than those who restrict their horizons to the homey outlets and mediocre coffee of a corporate giant, living too much life in blogtopia (Thank you Skippy!) can become just as limiting.

There was and still is, much to do. Recovering Cheryl from expeditions after declaring herself "lost" is more fun than most might imagine. Living a life amongst five local wineries is more than a little delightful. Being able to actually buy a large portion of daily food directly from the farm gate has less to do with ethics than it does with improved taste and a our new reality.

And those things are just the markers at the base of a rather large mountain. One I intend to climb. For while I am very familiar with this "new" home, I have learned to appreciate more of what it has to offer, seeing it through the eyes of another and viewing when compared to other places I have lived.

So, I'll be here occasionally to contribute. Not often, not long. I look forward to a lesser commitment.

I ponder what events I think require comment. Not many actually.

Harper? Painted himself into a corner in room he built too small for his ego. He is now owned by the opposition and ideology he so despises. Those who suggest otherwise are fools. I look forward to the comments of those who would continue to support him.

The departure of Bush? Bah! He's gone... and he got away with it. That he didn't envelope himself in the pastoral bliss of Crawford and opted for secluded opulence instead was completely predictable. That it isn't quite the same as the community as that which had existed when he was the governor of Texas might yet drive him back to his chain-saw.

The pillaging of the taxpayers by corporate failures? Right. They keep their jobs, their bonuses and their obscene lifestyle. Who pays for what they did? (And they did it with malice aforethought.) No need to comment further.

The meltdown? The media spreads the gloom as often and as hard as possible because IT sells copy. That sells advertising and advertising dollars are becoming harder to find. And if they keep the gloom alive, they may well become their own executioners as they spread the horror. Does that make me a skeptic?

No, there's something else. It'll be my next post and it might take a bit of time to get to it. There are other things to do at the moment.

* To help you with the title.
Posted by Dave at 12:26 Recommend this Post