There's dead right and then there are the wingnuts 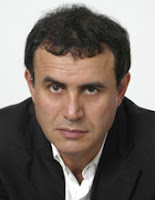 Over here Canadian Cynic is expending valuable energy addressing the entirely flawed hypothesis of a Blogging Tory in which the BT repeats the fallacious arguments of CNBC mouthpiece Rick Santelli and the emperor of the mouth-breathing US right-wing, Rush Limbaugh.

The argument? That people who are unable to make mortgage payments on the houses they purchased during the US housing bubble are the sole cause of the global economic meltdown. In short, (and directly quoting Santelli and Limbaugh), losers. (Why do I get this niggling feeling that they left something out of the extreme ignorance of their rants?)

All this brings to mind something that happened two and a half years ago.

On Sept. 7, 2006, Nouriel Roubini, an economics professor at New York University, stood before an audience of economists at the International Monetary Fund and announced that a crisis was brewing. In the coming months and years, he warned, the United States was likely to face a once-in-a-lifetime housing bust, an oil shock, sharply declining consumer confidence and, ultimately, a deep recession. He laid out a bleak sequence of events: homeowners defaulting on mortgages, trillions of dollars of mortgage-backed securities unraveling worldwide and the global financial system shuddering to a halt. These developments, he went on, could cripple or destroy hedge funds, investment banks and other major financial institutions like Fannie Mae and Freddie Mac. The audience seemed skeptical, even dismissive. As Roubini stepped down from the lectern after his talk, the moderator of the event quipped, “I think perhaps we will need a stiff drink after that.” People laughed — and not without reason. At the time, unemployment and inflation remained low, and the economy, while weak, was still growing, despite rising oil prices and a softening housing market. And then there was the espouser of doom himself: Roubini was known to be a perpetual pessimist, what economists call a “permabear.” When the economist Anirvan Banerji delivered his response to Roubini’s talk, he noted that Roubini’s predictions did not make use of mathematical models and dismissed his hunches as those of a career naysayer.

Except that Banerji was completely wrong and Nouriel Roubini was completely right. In fact, when a majority of economists were calling Roubini "Dr. Doom", Roubini was continuing to look outside the computer models for more information. What he found was terrifying. The picture he saw forming was that of a simultaneous pair of train wrecks: one brought on by sub-prime mortgage lending coupled with under-capitalized banks and the other being an enormous US federal current account deficit.

[W]henever optimists have declared the worst of the economic crisis behind us, Roubini has countered with steadfast pessimism. In February, when the conventional wisdom held that the venerable investment firms of Wall Street would weather the crisis, Roubini warned that one or more of them would go “belly up” — and six weeks later, Bear Stearns collapsed. Following the Fed’s further extraordinary actions in the spring — including making lines of credit available to selected investment banks and brokerage houses — many economists made note of the ensuing economic rally and proclaimed the credit crisis over and a recession averted. Roubini, who dismissed the rally as nothing more than a “delusional complacency” encouraged by a “bunch of self-serving spinmasters,” stuck to his script of “nightmare” events.

And Roubini was making it clear where the fault lay: With predatory mortgage lending, securitization of debt and rating agencies which were clearly in conflict-of-interest. In short, a lack of regulation, a "wild west" mentality and derivative financial instruments which were so complicated and being sold back and forth in so many different forms that almost no one could make any real sense of them. In fact they were so toxic that they were less than worthless.

Now, thanks to Ron Beasley, we find Roubini on the pages of Forbes magazine issuing an analysis of the problem and providing another dire warning. If the regulations aren't tightened up considerably, this whole thing will just keep getting worse. And, far from the "loser" hypothesis of Santelli and Limbaugh, Roubini makes it clear that the US government has to step in:

... two elements, both key to avoiding a near-depression, which are still missing: a cleanup of the banking system that may require a proper triage between solvent and insolvent banks and the nationalization of many banks, even some of the largest ones; and a more aggressive, across-the-board reduction of the unsustainable debt burden of millions of insolvent households (i.e., a principal reduction of the face value of the mortgages, not just mortgage payments relief).

Note, the lack of "loser" connotation when referring to insolvent households. That's because Roubini knows the fault doesn't lay with those households - it lays with the system which got them there: The Reagan/Thatcher Laissez-Faire capitalism.

Make no mistake, Roubini believes in capitalism; just not the unregulated form that is responsible for the worst financial mess since the Great Depression. In other words, you can have a free-market but not a free ride. And if you are a bank, you're going to learn to play by the rules or be booted off the field.

[T]he self-regulation approach created rating agencies that had massive conflicts of interest and a supervisory system dependent on principles rather than rules. In effect, this light-touch regulation became regulation of the softest touch.

Thus, all the pillars of the 2004 Basel II banking accord have already failed even before being implemented. Since the pendulum had swung too much in the direction of self-regulation and the principles-based approach, we now need more binding rules on liquidity, capital, leverage, transparency, compensation and so on.

He's been right too many times to ignore.

The wingnuts, on the other hand, will continue to whine and cry like a bunch of gut-shot coyotes and try to blame anyone who isn't them. And they will continue to be wrong on orders of magnitude we can only imagine.