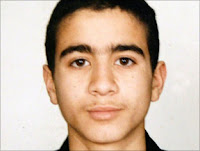 The unanimous decision released this morning said the federal government now must hand over documents pertaining to those 2003 interrogations by agents with the Canadian Security Intelligence Service and Foreign Affairs Department, since Canada participated in a process that was contrary to international law.

The ruling delivers a blow to Prime Minister Stephen Harper's government which has been unwavering in its support of the U.S. war crimes prosecution of Khadr despite mounting domestic and international pressure."

Good on the Supremes.
Khadr's lawyers were hoping to also force the government to release a "U.S. post-battle report in Canada's possession that may contradict other accounts of the July 2002 firefight. Military prosecutors told a Guantanamo court last month that the original report had gone missing."

It's not clear from this ruling if that report will now be denied them. It's the one in which :

"Lt. Col. W.", the Army Commander for Eastern Afghanistan at the time of the attack, had initially written in his report the day after the firefight that "the person who threw a grenade that killed Sgt. 1st Class Christopher J. Speer also died in the firefight"

- casting doubt on any subsequent report blaming Khadr.
The U.S. has "lost" their copy so making the Canadian government cough up theirs is crucial to Khadr's case; Khadr's U.S. military lawyer says he will almost certainly lose the case without it.
Incredibly, Canadian "Government lawyers had countered that they did not have an obligation to disclose documents for a U.S. trial."

Our government - not too good at protecting the rights of Canadian citizens in detention abroad but absolutely excellent at ass-covering.

Kady O'Malley has more details and a link to the actual *unaminous* ruling.

More Kady : "The federal judge who will, as per today’s ruling, make the final decision on which documents will be disclosed to Omar Khadr’s legal team, and which may be redacted or withheld for reasons of national security grounds is Richard Mosley — the same Richard Mosley who, during a previous incarnation as associate deputy minister at the Department of Justice, was responsible for drafting much of Canada’s current anti-terrorist legislation, which has raised concerns over potential conflict of interest in the past."

Cross-posted at Creekside
Posted by Alison at 09:08 Recommend this Post