Back for a short visit. Let's talk about the weather. 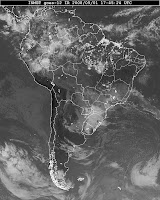 Big City Lib contacted me about an email received that suggested a meteorologist in Cuba saw a tropical disturbance forming off Brazil and Uruguay. Sure enough, there was something there. While this could be declared rare, that isn't necessarily the case. Brazil has been slammed by hurricane force cyclones before. While this one was starting to brew around the end of April, Brazil has been hit by hurricanes and tropical revolving storms in February and March of previous years.

In 2004 a hurricane dubbed Catarina made landfall on March 27 and in 1988 sixty-five people died when a TRS hit Rio De Janeiro on February 21.

The area to the east of Brazil commonly produces tropical revolving storms in the late Winter/early Spring, although few develop into full-blown hurricanes.

The first significant wave to develop off Africa was over the weekend, although the water temperatures are too cold to see it become much of a threat.

There was a lot of hoopla about this report. In my view it didn't deserve more than a passing glance. The truth is, the forecast was way too early to be of much value and the actual forecast says that in that the authors admit that early April forecasts have not shown forecast skill over climatology.

On the other hand, this could be the next Pacific typhoon. Rammasun has been upgraded from a Tropical Depression to a warning status storm. Brace yourself Rev, this could be a wet one.

I'm back until Friday, when I'll be leaving again for about 3 weeks. See you then!
Posted by Dave at 18:07 Recommend this Post