Steve's mission statement for the Canada First Defence Strategy
Monday - $30 billion
Jay Paxton, Peter MacKay's press secretary : "As such, the speeches are the strategy."
Dan Dugas, MacKay's senior spokesman : "The strategy is what they unveiled."
Wednesday - upon further reconsideration - $50 billion
Peter MacKay's office : "There's a very detailed cabinet document that lays this down and more."
Defence Department senior military official who apparently cannot be named : "There is a very solid, detailed document in existence. It's not just stuff pulled out of the air."
Ok, so not just something Steve pulled out of his ass which he can stuff right back in again when it suits him (h/t Boris)
There is a plan - they're just not entirely sure what it is yet - but Pale at A Creative Revolution took particular note of this :

"One senior officer used an expletive to express his dissatisfaction with how, in his view, the most proactive spending plan the Forces have ever seen was being communicated to the public."
"Military planners said they took a comprehensive modern approach to predict what global security risks or "conflict drivers" such as terrorism, climate change or population migration would drive up demand for the services of the Forces.

"Food is one, oil is another one, water is one," said another military official."

and asks :
Is this finally Steve's military plan to "battle" the climate crisis?
Is this Steve's Green Plan? : 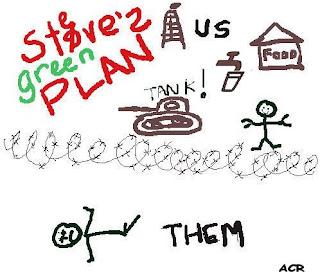 Note : I made a very small addition to Pale's drawing which I hope she will not mind.
Cross-posted at Creekside
Posted by Alison at 00:01 Recommend this Post