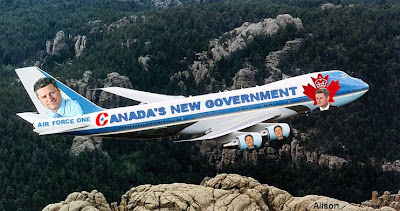 David Pugliese : "Canada's defence strategy for the next 20 years will be based on speeches by Prime Minister Stephen Harper and Defence Minister Peter MacKay given Monday in Halifax.
In a highly unusual move, the Conservative government will base its entire future rebuilding of the Canadian military on Mr. Harper's 10-minute speech and Mr. MacKay's 700-word address. No actual strategy document has been produced, nor will be produced, according to government and defence officials."
Steve's Mission Statement is called the Canada First Defence Strategy.
Jay Paxton, Mr. MacKay's press secretary : "It is a strategy that you heard enunciated by the Prime Minister and Minister MacKay."...snip..."As such, the speeches are the strategy."
Accidental Deliberations : "For those who held out hope that the Cons' brand of cult conservatism would stop at a mere Stephen Harper portrait gallery, matters have managed to get worse. From now on, Canada's national defence strategy consists of parsing the Glorious Leader's prophetic vision of Canada Firstness."
Cross-posted at Creekside
Posted by Alison at 19:05 Recommend this Post