Emma the Embryo and the Kicking Abortion's Ass Bill 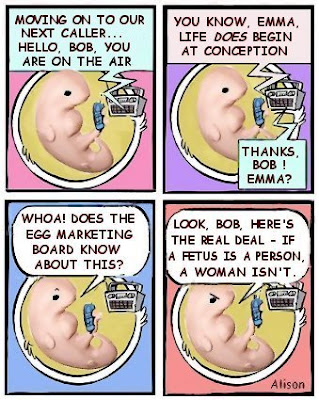 "Regardless of Ken Epp’s stated intent for the bill – to protect pregnant women and wanted fetuses from violence – he should realize that once enacted, his bill can be used in ways he did not intend .... By recognizing the "rights of the unborn," it creates the risk that pregnant women’s behaviour could be regulated or punished, and abortion rights restricted."

Plus, although Epp cannot be held directly responsible for the, uh, enthusiasm of his followers, their references to C-484 as a Kicking Abortion's Ass bill aren't really helping his case any.
Cross-posted at Creekside
Tuesday Update : PSA at Canadian Cynic massacres C-484 :
Ken Epp's Big Con
Posted by Alison at 21:59 Recommend this Post