so sell a few Michelanglos and feed Africa

I think most reasonable people, where ever they are on the political spectrum, would agree that hunger and poverty are objectively bad things and the fact that one in six people on this planet does not get enough to eat is pretty awful, especially when we in the wealthy developed world look at the plenty that surrounds us.
So when I saw this story about the UN food conference in Rome, it perturbed me. As usual, all the diplomats sitting at the banquet table agree that hunger in the poorer nations is a terrible thing and "somebody ought to do something about it" - at least, they all agree until coughing up some money to irrigate fields in Africa or start fish farms in South East Asia or build better dykes in Bangladesh is discussed and then suddenly everyone is full of excuses.
But then I read a little further and got really ticked off.

"Despite endorsing the strategy in the first hours of Monday's meeting, the 192 participating countries did not commit to the $44 billion a year for agricultural aid that the U.N. Food and Agriculture Organization says will be necessary in the coming decades.
Soon after the delegates approved the declaration, Pope Benedict took the floor to decry "opulence and waste" in a world where the "tragedy" of hunger has been steadily worsening. Benedict's speech marked the first time a pontiff attended such a gathering since Pope John Paul II took part in a 1996 food summit.
The pontiff, lending his moral authority as head of the world's 1 billion Catholics, also called for access to international markets for products coming from the poorest countries, which he said are often relegated to the sidelines."

The Pope, who insists that every sperm is sacred and his flock must keep having lots and lots of Catholic babies, who lives in a golden palace full of priceless art in his own nation-state in the middle of Rome with his own private army and bank (estimated to have at least $10 billion invested in foreign corporations), who presides over a global organization that brings in an estimated $50 to $100 million a year in donations alone, who made sure that the Church spent millions defending pedophiles in the U.S. and elsewhere and who wears simply fabulous hats, is decrying "opulence and waste."
Yeah, right. 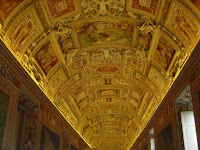 Sure, the Catholic Church is one of the world's largest charitable organizations and Catholic charities do a lot of good work, but how many of "Peter's Pence" get spent on running a parallel religious school system where there is already a perfectly good public school system? How much of that money is going to the pay for the Monsignor's Cadillac? What is the ratio of bibles to bags of rice that are getting shipped to starving nations? How much is getting spent on making women feel bad about seeking an abortion or using birth control? How many lives, how many man-hours of labour, skull-sweat and angst have been dedicated to appeasing an invisible sky-daddy instead of helping humans in the here and now?
I'm not saying the Catholic Church (or any other church for that matter) doesn't do good works -- it does provide some vital services in some pretty grim places around the world. But for God's self-proclaimed spokesman on Earth to sit in the lap of luxury and start railing about "opulence and waste" is just a bit rich.
Crossposted from the Woodshed
Posted by Unknown at 20:49 Recommend this Post

Email ThisBlogThis!Share to TwitterShare to FacebookShare to Pinterest
Labels: camels passing through the eye of a needle, relgion, teh pope