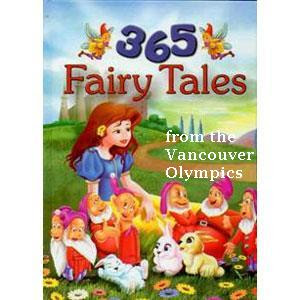 When I read the headline on Dave Obee's column I was a little confused.

Ditch the cynicism and enjoy the Games

Yeah, well... I don't have it in me to drop the cynicism. Obee makes a valid point in his column with respect to protesters. I would agree that those who feel the need to make a loud and disruptive statement over the games probably damage any cause they represent by:

a. Not making their cause clear;
b. Merging it with a thousand other causes that are just as unclear;
c. Pissing people off who are just trying to have fun (at a time when "fun" is coming at a high personal and collective cost);
d. Unwittingly contributing to an economic boost which they protest is not going to happen from holding a five-ring circus.

Obee then goes on to tell us how he was at the 1988 Calgary games and what a wonderful deal they were. Hmmm. I was also at the 1988 Calgary games... in Canmore. It pains me that Obee thinks the biathalon is boring. Being an involuntarily assigned part of the Olympic Games structure in 1988 was a huge pain in the ass, but since the only thing I saw was the biathalon, boring it was not.

Obee then goes on to explain why we should remain cynical.

Now, VANOC has produced another reason not to believe anything they pop on us. Ron Judd at The Seattle Times got a press release from the VANOC spin merchants. If you weren't cynical before, you should be after you read Ron's words.

The press release was issued before the arrival of the Olympic flame in Victoria on Friday, 30 October. The media was expected to sit on it until after the "embargo" was lifted at 10:45 PDT on the 30th.

Amazingly, the VANOC fantasy fairies knew in advance how everything would go, and the exact words spoken by VANOC king-of-the-trough, John Furlong, and BC premier Gordon Campbell, even though they had not yet spoken them. The VANOC communications directorate even managed to capture the emotions of all those who spoke and participated in the event even though the event had not yet occurred.

Some of you might remember the blathering of Fox TV uber-right-wing nutball Glenn Beck, when he outright lied about the cost of the Vancouver Olympic Games in an effort to cast the Chicago Olympic bid as a bad Obama initiative. The White House Press Secretary tore Beck (quite deservedly) to shreds for yet another lie since, as anyone who could get to a keyboard pointed out, the Vancouver Olympics had not yet occurred.

While Beck certainly has a recurring problem with the truth, the recent activities of VANOC PR and communications give one a moment of pause. Did Beck perhaps get his information from VANOC? Both seem able to report on events which have not yet transpired.

I can hardly wait for the "Tears of Joy" stories from VANOC.

And here is the unaltered press release which described the sham from start to finish, before it ever happened.

VICTORIA, Oct. 30 /CNW/ - The Vancouver 2010 Olympic Torch Relay is officially underway with Him/Her revealed today as the first torchbearer to hold the Olympic Flame aloft on Canadian soil at the start of the historic 106-day journey celebrating Olympic Spirit and Canadian pride from coast to coast to coast.

Upon the relay's conclusion on February 12, 2010 with the start of the Vancouver 2010 Olympic Winter Games, the flame will have burned brightly in over 1,030 Canadian communities and reached within 900 kilometres of the North Pole.

"The flame embodies the Olympic ideals of excellence, friendship and respect. These values resonate deeply with all Canadians," said Stephen Harper, Prime Minister of Canada, as he welcomed the flame at the public ceremony in downtown Victoria.

"The Olympic Flame will be travelling across Canada on the longest torch relay within a single country in Olympic history. With nearly 200 communities across Canada participating in local celebrations, this is a chance for Canadians from all parts of our great nation to share in the excitement as we count down to the Games' opening day."

With the glow of the Olympic Flame guiding their way, a ceremonial party of First Nations chiefs paddled across the waters of Victoria's Inner Harbour this morning towards the public welcoming ceremony cradling the flame from the dramatic jutting bow of a traditional canoe.

On shore, onlookers waved Canadian flags as they lined the harbourfront and sweeping green lawns of the British Columbia Parliament Buildings craning for their first look at the flame.

Traditionally painted with a Salish sea wolf on the blade-like bow, the Four Host First Nations canoe carrying the flame - a 13.5-metre ocean-going craft hand-carved from a single towering West Coast red cedar - was flanked on the historic voyage by two other canoes manned by representatives of the local First Nations who sang traditional songs.

Before docking, the Lil'wat, Musqueam, Squamish, and Tsleil-Waututh chiefs asked permission to come ashore and passed the Olympic Flame, protected in a miner's lantern, to fellow leaders of the Songhees and Esquimalt nations upon whose traditional territories the Parliament Buildings stand. After a brief ceremony conducted in accordance with Salish protocols, the chiefly procession then carried the flame to a stage setup on the grounds for the start of the welcoming ceremony, accompanied by Aboriginal flame attendants Dina Ouellette and Aronhiaies Herne.

In a tribute to Jack Poole during the ceremony, the crowd bowed their heads in a moment of silence. The chairman of the Vancouver Organizing Committee for the 2010 Olympic and Paralympic Winter Games' (VANOC) board of directors passed away last week just hours after the flame was lit by the sun in Olympia, Greece.

To honour his memory, Poole's wife, Darlene, ignited a small torch with the Olympic Flame and set the 1.2-metre community celebration cauldron ablaze on stage. This same cauldron will be lit in nearly 200 celebration communities across Canada as part of the Vancouver 2010 Olympic Torch Relay, which officially starts today.

"What a magical moment," said John Furlong, VANOC's Chief Executive Officer. "We are embarking on an odyssey that we hope will shine a bright light on the people and places of Canada, starting right here in Victoria. For 106 days, we will have the time of our lives finishing back here in British Columbia for an Olympic Winter Games we hope will be marked in history as among the best."

Earlier this morning, at approximately 7:15 am (Pacific Time), the Olympic Flame touched down on Canadian soil at Victoria International Airport after flying for almost 24 hours on board a Canadian Forces CC-150 Polaris (Airbus A-310) aircraft from Athens, Greece, where the flame was entrusted to Canadian officials for the Games by members of the Hellenic Olympic Committee.

The flame was carried off the plane in a miner's lantern by Gregor Robertson, mayor of Vancouver: the Host City of the Games, as the stirring skirls of a solo bagpiper filled the early morning air. The Canadian prime minister and British Columbia Premier Gordon Campbell were among the dignitaries on hand for the flame's arrival celebrated with a 50-member honour guard and a flyby of four CF-18 jets from the 409 Tactical Fighter Squadron streaking overhead in a classic box formation.

Moments later on Belleville Street, near the British Columbia Parliament Buildings, the first torchbearer flame handover took place - the first of 12,000 such exchanges marking the passing of the sacred fire to a new torchbearer. All 12,000 torchbearers will carry torches designed and manufactured by Bombardier and wear white uniforms accented with bright bursts of blue and green on the jacket's left arm, provided by the Hudson's Bay Company as keepsakes of their moment in Olympic history.

"The Olympic Torch Relay brings the spirit and energy of the Olympics to communities throughout British Columbia and across Canada," said Premier Campbell. "With the arrival of the flame on Vancouver Island, we are marking the start of an historic journey that will connect all Canadians and focus the eyes of the nation and the world on British Columbia when the relay ends here in just 105 days to kick-off the Vancouver 2010 Winter Olympic Games."

Today on Day 1 of the relay, the flame will visit 11 communities and places of interest in the Capital Regional District of the province and be carried by 147 torchbearers over 90 kilometres on foot, bike and boat. Among the areas visited are XX Aboriginal communities - the first of more than 100 First Nations, Inuit and MÃ©tis communities the flame will visit across Canada. More than 600 Aboriginal people are also playing important roles in the relay, such as torchbearers and honorary elder fire keepers.

Tonight, the Parliament Buildings in Victoria will once again welcome the Olympic Flame - this time as the site of the first community celebration of the 2010 torch relay. The celebration will include dance, theatre, visual and performance art, multimedia technology, and pyrotechnics. Members of the Victoria Symphony and hundreds of First Nations drummers and Les Cornouillers dancers will perform as the Parliament Buildings are painted in light with massive projections. Jeneece Edroff, 15, will light the community celebration cauldron on stage after she was selected by the community as their final torchbearer of the day.