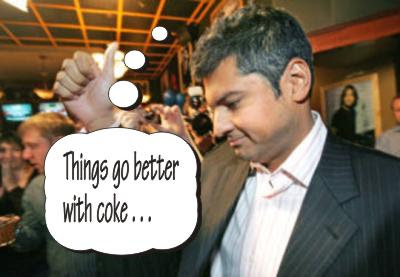 HELLACIOUS HELENA'S HUBBY has beat the rap! The egregious Rahim Jaffer is the mysterious beneficiary of a get-out-of-jail-free card issued by some weasel.

According to the G&M:

He was initially charged with driving while having more than 80 milligrams in one hundred millilitres of blood, speeding and possession of cocaine.

The former MP was sentenced to a $500 fine. He had already agreed to make a $500 charitable donation to the Canadian Cystic Fibrosis Foundation.

“I'm sorry. I know this was a serious matter,” Mr. Jaffer said afterward outside the court. “I know I should have been more careful and I took full responsibility for my careless driving.”

So, for one of the Harper elite, a coke possession charge, a +.08 impaired charge and a 43kph over-limit speeding offence all resolves to "careless driving"?

Time to show Stevie how much we care about "careless". Grrrrrrr.